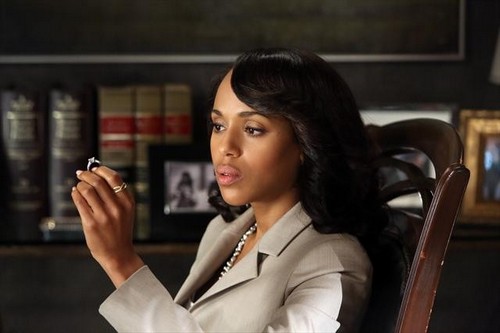 SCANDAL returns to ABC with a new episode called, “Truth or Consequences.” On tonight’s show Olivia hits her breaking point.  Did you watch the show before the hiatus. We did and you can catch up HERE!

On last week’s show changes continued to rock the White House, as we also flash-backed to learn more about the rigged election. Meanwhile, things got heated between Olivia and Edison after he made a shocking accusation.

On tonight’s show after discovering the truth about the rigged White House election, the “Gladiators in Suits” realize that a quickly unraveling Olivia may not always wear the white hat. Meanwhile, Mellie is forced to take extreme measures to try and reel Fitz in.

Tonight’s episode looks like it is going to be a great episode and you won’t want to miss it, so be sure to tune in for our live coverage of ABC’s “Scandal” Season 2 episode 12 at 10 PM EST! While you wait for the recap, check out s sneak peek video and some pics from tonight’s episode below!

Tonight’s episode begins with David dropping bombshells in the White House claiming to have proof that the last election was fixed. Meanwhile Mellie is losing her mind and runs to Cyrus demanding he get Fitz under control. The president has not only come to but managed to ask for a divorce.  Olivia is clued in to the risk of the whole presidential teams being outed for the rigged election.

Cyrus goes after Fitz and informs that he can’t possibly be delusional enough to think that he can divorce his 9 months pregnant wife and remain pregnant. Fitz tells him that the amazing thing about being shot and nearly dying is that all fear has disappeared. He reevaluated what’s important and that means that he needs to leave his disastrous marriage, period.

Olivia is totally coming unglued and Cyrus is also trying to keep her together. He tells her that he’ll take care of the festering scandal. She goes home and crawls into bed and calls Fitz in tears. Harrison asked her to marry him and she doesn’t know what to do. Fitz tells her he asked Mellie for a divorce and asks Liv to please wait for him. She hangs up and continues lying there. Harrison goes to her office and asks her coworkers for help. He tells them Liv won’t get out of bed. Abby says she thinks they’ve found their next client and it’s in-house.

Olivia Pope’s staff goes into the meeting room and decides to exchange all the info that they have with each other under the terms of no judgement. They all learn what happened to Lindsay, that Hollis blew up Cytron and they realize Liv might be connected to the faulty voter machines malfunctioning.

Huck storms out and goes to Liv’s. He crawls into bed with her and tries to talk sense into Liv. Huck tells her that Cyrus is in his circle and that he will be killing Hollis, that’s how he’ll take care of it. Liv gets out of bed fast upon hearing that.

Olivia turned Hollis in for conspiracy to commit murder.  Liv meets with Cyrus and he is now terrified that the truth will get out and they’ll all be brought to justice. Liv then goes to her office and offers to come clean with her staff. None of them want to know so that they can’t be called as material witnesses. Instead they ask Liv how they can help her.

Huck goes to jail to visit Becki. He realized that he screwed up her big job two years ago- Cytron. She was supposed to set Quinn up and Huck rescued her instead. Huck tells Becki that she’s the only one he can be himself around.

Cyrus tells Mellie that Fitz is serious about divorce so if she has any tricks up her sleeve to save her marriage she needs to pull them now. After talking to her Cyrus calls his hitman and tells him that he’s working on getting Hollis released and to sit tight.

Cyrus again talks to Fitz and Fitz tells him he is going to see Olivia. As he puts his coat on he’s told Mellie is in labor. He goes to help her through the delivery. Meanwhile Liv and company realize that Hollis didn’t order the hit on the president and Huck scrambles to reach Hollis in time. You’ll have to tune in next week to see what happens.