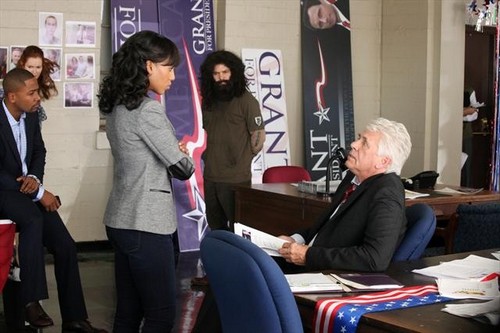 SCANDAL returns to ABC with a new episode called, “A Criminal, a Whore, an Idiot and a Liar.”  On tonight’s show Crimonals, whores, idiots and liars… oh my!  The White House continues to be rocked by changes.  Did you watch the show before the hiatus.  We did and you can catch up HERE!

On last week’s show with Huck being held under the Patriot Act, Olivia and the team got unexpected assistance from an old friend. Meanwhile, Olivia helped Mellie out of a very compromising situation that could affect Fitz’s future, and her relationship with Edison reached a boiling point.

On tonight’s show changes continue to rock the White House, as we also flashback to learn more about the rigged election. Meanwhile, things get heated between Olivia and Edison after he makes a shocking accusation.

Tonight’s episode looks like it is going to be a great episode and you won’t want to miss it, so be sure to tune in for our live coverage of ABC’s “Scandal” Season 2 episode 10 at 10 PM EST! While you wait for the recap, check out s sneak peek video and some pics from tonight’s episode below!

Fitz is down 10 points in the campaign.  Liv and the rest of the team are thinking of ways to help him out.  Rigging the election is suggested, though no one is too happy with that idea.  They suggest bringing in Fitz’s father for help and they already know he won’t agree to it.

His wife sees him in the hallway and suggests they talk to his father.  Fitz is not having it.  His wife reminds him that he is 10 point down and tells Liv to talk to him since he seems to listen to her.  Liv and Fitz end up in bed.

Back to the present:

Fitz has awakened and is recovering from his injuries.  He wants to know what the side effects may be.  His nurse gives him a list of possibilities.  One of which is the inability to make executive decisions; his primary job.

Back at the white house the Vice-President is trying to make the rest of the team believe that Fitz is unable to do his job.  In the middle of the meeting Fitz walks in looking as though nothing has happened, aside from the scar on his head.

Fitz is practicing his debate skills.  His father humiliates him by correcting him and showing him up.  Fitz isn’t happy.

Fitz’s team is having dinner with his father.  Fitz clearly doesn’t want his father’s help.  The dinner doesn’t go well as Fitz pretty much tells his father that his mom is dead because he only cared about himself.  His father is upset and goes to bed.

Fitz continues to drink and later follows Liv to the elevator.  He wants to sleep with her, but she reminds him that he is drunk.  She is willing to have a cup of coffee and talk, but that’s it.  Fitz can’t help himself and is all over her.  She is trying hard to push him off when the elevator opens and Millie is standing there with a shocked look on her face.  Fitz doesn’t have anything to say and walks out.  Millie walks in and stares at Liv.  Liv is about to apology when Millie beats her to it.  “I want to apologize for Fitz.”  This catches Liv off guard.  Millie continues to make excuses for Fitz and remind Liv that she and Fitz would not be able to continue without her.  They need her.  Liv says its fine and they hug.

Fitz is in a meeting discussing the assassination of an Iranian leader when he forgets what he’s saying mid-sentence.  The Vice-President helps him out and the entire table looks worried.

Fitz’s father explains that they need to run a dirty campaign if they are going to win.  Fitz tells Liv and Cyrus to do what his father says.

Live assembles her team.  Harrison, Abby and Huck meet for the first time.  The team tries to dig up dirt on Fitz’s opponent, but his father says what they have is weak.

On the plane election rigging comes up again.

Liv and Fitz are getting the stage ready for the town hall meeting.  He’s frustrated and so is she.  Liv tells him that he’s always trying to do and say things to make everyone else happy and she would have caught that before if they hadn’t been screwing around.  She tells him to let the public know him.

During the press conference a reporter asks Fitz if he’s worried about PTSD or brain damage.  Fitz answers no.

Back at the White House, The Vice-President accepts Fitz’s reinstatement and tells him that she hasn’t slept since he got shot.

On the plane the team is still talking about rigging the election.  It has to be unanimous, but Liv won’t agree to it.  She walks to Fitz who tells her that his father had a heart attack and died 20 minutes ago.

Edison is waiting inside Liv’s apartment.  He apologizes for saying she slept with the President and for saying that someone forged Fitz’s signature.  Then he asks her to marry him.

Back at the Whtie House Mellis and Fitz are getting ready for bed.  Mellie is telling Fitz what a great job he did.  She is talking and praising him.  She tells him that they could have anything they want and they should take advantage.  She asks him what he wants.  Fitz tells her he wants a divorce.

Cyrus is trying to make Liv understand that they have to rig the election if they are going to win.  She doesn’t want to do it. She has her own flashbacks of all the times Fitz has said he wants to win.  Flying home on the plane with the team there is only one day until the election.  Liv finally breaks down and says she’s in.  Hollis makes the call.