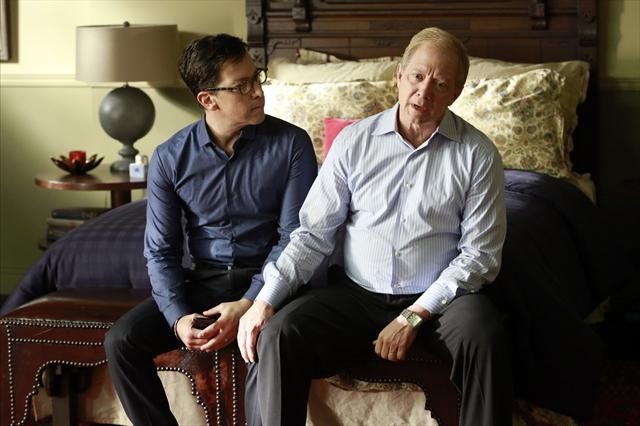 Tonight on ABC is the mid-season premiere of SCANDAL called “One for the Dog.” On tonight’s show our favorite characters learn that power comes with a price!  Did you watch the show before the hiatus.  We did and you can catch up HERE!

On last week’s while working in the White House, Olivia helps Vice President Sally Langston; Cyrus stumbles across the truth about James’s secret investigation; and one of Olivia’s associates struggles to come to terms with a shocking betrayal.  We should also find out if Huck is the shooter?  What do you think did Huck shoot President Huck?

On tonight’s show with Huck being held under the Patriot Act, Olivia and the team get unexpected assistance from an old friend. Meanwhile, Olivia helps Mellie out of a very compromising situation that could affect Fitz’s future, and her relationship with Edison reaches a boiling point.

Tonight’s episode looks like it is going to be a great episode and you won’t want to miss it, so be sure to tune in for our live coverage of ABC’s “Scandal” Season 2 episode 10 at 10 PM EST! While you wait for the recap, check out s sneak peek video from tonight’s episode below!

It has been weeks since Fitz was shot and the White House is falling apart. The VP seems to be more than a little shady and so someone has forged a reinstatement letter putting a comatose Fitz back into power. Mellie tries to bluff with Sallie, the VP but the gig won’t last for long. Meanwhile Olivia is now working overtime to help Mellie keep the situation under control.

Edison is wondering why his sex life with Olivia is being affected by the president taking a few bullets.

Edison is wondering why his sex life with Olivia is being affected by the president taking a few bullets. Little does he know Liv’s heart and body is really with Fitz. Olivia is spearheading the biggest lie ever- that Fitz woke up and is ready to take office. Meanwhile she sits at his bedside grieving the man that she has loved for years.

Huck is still being treated like the most hated guy in the states. He didn’t shoot Fitz but it’s being pinned on him so he is being water boarded and beat senseless.

He has been tortured for three days and won’t crack.

Mellie is afraid of the public thinking her husband is weak and she is gently reminded that he is unconscious. Edison comes to the hospital to see the president and appears to be catching on to the idea that Fitz may not be okay. He fights with Liv and threatens to prosecute everyone if they’re lying because he does actually make the laws.

Huck somehow has been freed and is looking for Becki, the chick that actually shot Fitz. She appears to be taking aim at the hospital where Fitz is being treated. Huck has been released to Liv’s custody and the whole office is thrilled to see him.

Sallie calls Mellie in for a meeting and shows her the letter of reinstatement. She points out that Fitz is right handed but that it was signed by someone that is left handed, namely Mellie. Sallie tells her she needs to withdraw the letter or she will go public with the fact that it’s a fraud.

As Olivia is about to have a serious chat her phone rings and Fitz struggles to say hi to her. Now he is awake! Tune in next week to see if Fitz stays that way!