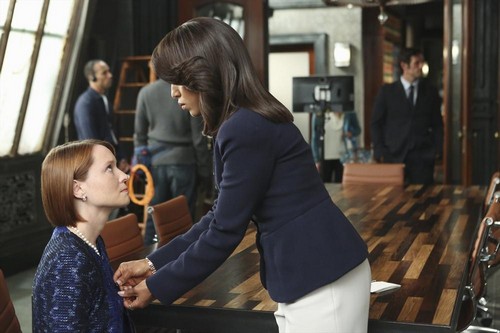 SCANDAL returns to ABC tonight with a new episode called, “Guess Who’s Coming to Dinner.” On tonight’s show Olivia’s past comes back to haunt her. Did you watch the last season’s finale? We did and you can catch up HERE!

On the last Olivia’s name got out there as the President’s mistress, both the White House and Pope & Associates faced their biggest scandal to date, and a surprise allegiance was formed in order to get things handled. Meanwhile, Olivia’s father, Rowan, would stop at nothing to carry out his orders and no one, including Olivia, could stand in his way.

On tonight’s show through flashbacks we learn more about Olivia’s estranged relationship with her father. Meanwhile, both the White House and  Pope & Associates are still in the middle of cleaning up the very big and very public mess they created.

Tonight’s episode looks like it is going to be a great episode and you won’t want to miss it, so be sure to tune in for our live coverage of ABC’s “Scandal” Season 3 episode 2 at 10 PM EST! While you wait for the recap, check out s sneak peek video from tonight’s episode below!

RECAP: We start in the past five-years earlier, Olivia is having dinner with her father Rowan; Rowan wants to make up for the mistakes he made in the past, he understand that sending her away wasn’t the right decision. Olivia made a deal with her father as an adult to have a weekly dinner with him in exchange for him paying for her law school.

Olivia then starts talking about how she has a boyfriend, her father wants to know if he’s good enough.  We get some scenes with her former boyfriend, not the president.

Then Olivia gets mugged by two guys,  Huck comes out of nowhere and helps her by beating up the two muggers.

Cut to present time – Olivia is taking a jog, there’s a news report being cut in during her jog about the president.  Olivia gets a call from the president, he wants to know about what happened to Jeannine Locke. The President (Fitz) mentions how he misses Olivia, that he met the Dalai Lama and that they shot some hoops together. They talk about how to help clear Jeannine name.  Olivia is going to defend Jeannine with the White House and accuse the president’s staff of slander.   The President them talks about a future he wishes they had together – having kids and what not.

In the past Olivia exits the metro system, this time she decides to than confront the homeless man (Huck) for saving her. Olivia wants Huck to tell her how he was able to defeat the muggers.  Huck decides to tell her how he was a trained assassin and began to talk about how he can kill a man with very little effort. Olivia asks if she has can call someone or help, he asks for a cheese burger.

In the past , Olivia is eating dinner with her father, her father pours her a glass a wine; Olivia is reluctant in doing so, but decides to give it a taste. Olivia turns out to like the wine, which pleases her father.  Rowan (Olivia’s father) wants to hear about how she was saved by a bunch of muggers. Olivia goes on about how the man who saved her spoke about being a train assassin, the father looks very suspicious of this all and clearly knows something about it. Olivia wants her father to look around  and find out more about this secret CIA – B613 the man mentioned.  He demands she drop the subject.

Present time – Cyrus is speaking to the president about Jeannine and tells Fitz that he should come out and say he had sex with her. The president is pretty pissed about the situation and tells Cyrus and Mellie and demands they fix the lie they told.

In the past Olivia is walking in the metro system, but then it cuts to her eating dinner with her father; she asks about Huck.  He mentions how Huck was arrested a couple of days ago.  Olivia still doesn’t believe that’s what happened.

Current time – Olive’s Dad Rowan shows up at the office and he is being weird about where Jake Ballard is.  Olivia ask Huck about the B613, she wants to know about what happens when someone go against an order. Huck speaks about how the program decides to bring up you up in their own way to make you the perfect assassin, that they first put you in a hole and hope you break, but if you don’t you’re killed instead.

Olivia calls Fitz and  tells him she hopes Jake is still alive and hopes that B613 hasn’t done anything to him yet; she wants him saved.  Fitz listen and is on it but Cyrus tells him he cannot do anything.

In the past, Olivia checks the pen and remembers how she was given it and how Huck was ranting about Acme Limited.  Olivia goes to dinner with her father and she puts the pen on the table.  Olivia wants to know exactly what her father does for a living, it’s important to her.   He admits nothing to her and tells her he’s enjoying the time they spend with the dinners.  Olivia doesn’t care and decides to walk away, she knows the answers to her questions.

Current time – Jeannine starts to open up to Olivia about the situation, she’s upset about the entire thing. She cannot believe she is being accused of having an affair with someone she has never been alone with.  Olivia lets her know that she’s got it under control and Jeannine has no reason to worry. Olivia leaves Jeannine’s place; a phone begins to vibrate on Jeannine’s desk and she gives an weird facial expression.  Jeannine meets with the First Lady.

There is proof that Jeannine did not sleep with the president but Jeannine has decided to have the evidence destroyed.

The president calls Olivia to talk about Jake, Olivia is having a nervous break down about the choices she needs to make, if she lets Jeannine lie, Jake goes free. Olivia decides to call her father, she says that she will put Sunday dinner back on the table in order to save Jake. Olivia then talks to Jeannine about what she’s doing, Olivia wants Jeannine to tell the truth. Jeannine is doing it all for the money, because she was offered 2 million dollars.

Olivia goes on about how Jeannine will end up hating her self in the end and that the money isn’t worth it. The president/Fitz is walking with Cyrus talking to him about the decision he has to make: one is to tell the truth, or to tell a lie.

Olivia is with Huck, Olivia agrees to get a cheeseburger with him; she gets a call from her father and he mentions how all he wants s her to be happy. Olivia wants nothing to do with her father, because he’s trying to completely control her life and make it the way he wants it.

The president gets on the T.V. and he decides to say that he had a relationship with Jeannine. Jeannine is confused and doesn’t understand, Olivia walks away.  Jeannine is more or less told she is famous, they will book her on a talk show and she will get a book deal.

Quinn talks to Huck about Jake,  Huck finds out  that Olivia made a deal to save him. Huck goes to Olivia he wants answers.  Huck grasps Olivia’s throat and asks her if her father is in command of B613.

Olivia admits that her father has something to do with the organization and Huck then walks away.

Olivia’s father call her and tells her to go to her front door.  She opens the door and Jake is there, he is in pretty bad shape.