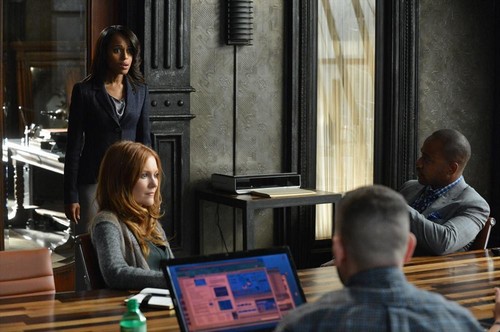 SCANDAL returns to ABC tonight with a new episode called, “It’s Handled” On tonight’s show Olivia finds out just what her Dad is capable of, in the shocking season 3 premiere. Did you watch the last season’s finale? We did and you can catch up HERE!

On the last season’s finale with the identity of the mole now closer than ever, Olivia and her team were in very real danger. Meanwhile, the latest White House scandal pushed Cyrus to his limits.

On tonight’s season premiere with Olivia’s name out there as the President’s mistress, both the White House and Pope & Associates face their biggest scandal to date, and a surprise allegiance is formed in order to get things handled. Meanwhile, Olivia’s father, Rowan, will stop at nothing to carry out his orders and no one, including Olivia, can stand in his way.

Tonight’s episode looks like it is going to be a great episode and you won’t want to miss it, so be sure to tune in for our live coverage of ABC’s “Scandal” Season 3 premiere at 10 PM EST! While you wait for the recap, check out s sneak peek video from tonight’s episode below!

Olivia’s dad is in charge of the secretive part of the CIA. She is fully aware of his job and that’s why she wanted to know why he tried to kill her. He didn’t. He explains he was trying to kill Jake at the time not her.

The moment the car stops Olivia’s dad shows her to the private plane he booked. He wants her to leave the country. He says the presidency will come gunning for her and it would best if she left. Olivia doesn’t believe him and so her dad mocks her. He never believed the president was going to marry her. The man was only stringing her along in his mind.

He wants her on that plane and he wants her to disappear. He’s willing to give her another identity. One after the other and he’ll also take care of her associates. He has everything neatly tied up but Ollivia won’t go. She almost did until she talked to Cy. He promises he can bury the story and Olivia wants to trust him. If she had left then Fitz would have thought Cy got rid of her and never trust him again. Olivia couldn’t do that to either of them.

As part of Cyrus’s plan, he wants the Vice President to take over some of Fitz duties as the heat slowly dies down. Yet when has Sally ever been easy. In her own words she won’t abet a philanderer. Fitz has to talk to her alone. He doesn’t bully her like Cyrus and is honest with what happened. His way allows Sally to accept their offer.

Olivia returns to work thinking she carry on as usual to find out that her clients are dropping in her. No one wants to be attached to her right now. Olivia refuses to do anything to save herself so her friends have decided to take it into their own hands. They are going to work it behind her back. A good thing once the press got hands on evidence of the affair. The moment that came out; Cyrus started a kill file. He’s going to paint her as the ambitious slut.

Olivia’s dad tries again in vain to get her out of firing range to no avail. She’s going to stay and fight whether he liked it or not. Then she does the worst possible thing. She arranges a top secret meeting with Fitz. She also invited Mellie too.

She wanted all three of them to come up with a plan. Olivia and Fitz create a way for him to tell the truth and survive. However Mellie doesn’t like it. It shouts aloud that Fitz was in love with Olivia. Mellie will only agree to a statement that the two slept together twice. Pure sex and no emotional entanglements.

There they all agree and Mellie leaves first. Why would she do that knowingly? Fitz does try to comfort Olivia and she allows for a little while. Then comes the time to do what needs to be done. She walks away from him. Maybe this time it’ll finally end.

Mellie left them to go to Cyrus. They won’t allow Fitz to admit to the affair. But do they clue in Fitz? No. That’s why he gives Sally the go ahead to take him down after his confession. He never got to make that confession. It seems Olivia’s people and Cyrus worked together on this one. They threw someone else under the bus. Olivia gets cleared and Cyrus slut shames the woman that was helping build a case against Olivia. Right away Olivia knows her people are behind this.

Fitz is furious. He wants to go through with the conference when Mellie tells him that it was her idea to throw Jeanine was it, to the sharks. She did it after realizing Fitz was the one to leak Olivia’s name to the press. He did it to free from under Mellie’s thumb. Fitz never truly went back to her and she knew it. They’ve been playing each other this whole time.

Olivia’s dad had given Cyrus some top secret file on what Fitz and Jake did during the war in return for Cyrus bring Charlie to them. It must be shocking if Cyrus appears to be stunned. What could it be? And is that the reason why Jake has been at the CIA’s mercy?