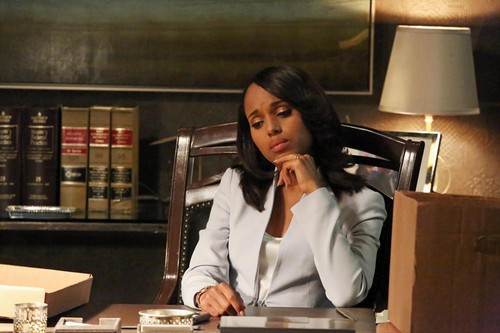 SCANDAL returns to ABC tonight with a new episode called, “White Hat’s Back On” On tonight’s show Olivia and her team find themselves in danger on the season 2 finale. Did you watch the last episode? We did and you can catch up HERE!

On the last episode the White House was in the middle of its biggest scandal to date and Cyrus was in the eye of the storm. Meanwhile, someone close to Olivia betrayed her and the team.

On tonight’s show With the identity of the mole now closer than ever, Olivia and her team are in very real danger. Meanwhile, the latest White House scandal pushes Cyrus to his limits.  What do you think?  Will Olivia Pope and the President really end up together, somehow I doubt it!  Still in the preview the President is insisting that Olivia will be moving in to the White House and they are getting married.

Tonight’s episode looks like it is going to be a great episode and you won’t want to miss it, so be sure to tune in for our live coverage of ABC’s “Scandal” Season 2 finale at 10 PM EST! While you wait for the recap, check out s sneak peek video from tonight’s episode below!

Finally, the season finale of Scandal is on!  In the last episode Mellie let the whole country know that their president is a cheating bastard and Fitz could care less. He has a plan. He’s going to get through the drama, marry Liv and  win a second term fair and square.

Olivia realizes that Billy Chambers is the mole, with the Cytron card, but the thing is David Rosen is listening to Liv ramble and HE actually has the card. He calls Billy Chambers to let him know that Liv and her crew are onto him. Govenor Restin had a meeting with Billy a few hours ago and Restin decides to have a meeting with Fitz. He tells him that he knows about defiance and that the election was rigged. Fitz has 24 hours to add him to the election ticket or Restin will tell everyone that he rigged his first term.

Cyrus gets tipped off to Restin and starts freaking out outside of Capitol Hill. As he attempts to get to Fitz in time to stop the meeting Cyrus appears to have a heart attack. From the ambulance Cyrus is shouting orders through the phone to Fitz. Once he gets to the hospital James is there  and they finally wake up.

David starts to get cold feed about bringing down defiance but Billy talks him into passing the memory card to him. Meanwhile Olivia meets with Restin to give him a false sense of security. They want him to think that Fitz will put him on the ticket. Mellie is still slightly crazy enough to think that she can keep her marriage intact. Fitz finally sets her straight and informs her that their marriage is over. He takes control of the situation and threatens to paint her as a racist if she outs Olivia as his girlfriend.

Liv is at her apartment on the phone with Fitz and when she hangs up someone is trying to bust down her door. Jake grabs her from behind and puts a bullet in the head of the woman sent to kill Liv. He then brings her to her office and demands that she stay there. He explains that her life is in danger as long as she is dating the president. Liv kisses Jake before he leaves and tells him to be safe.

Cyrus flips out and tells Liv that Fitz killed Verna. He then goes to Fitz and brings him the video of Liv screwing Jake. Huck and Quinn found Billy and are torturing him for the disk. Well Huck attempts to but freezes up. Quinn takes the drill and has no problem using it on Billy to get info. Huck told Liv earlier that Quinn scares him because she reminds him of how he was early in the job.

David brings the Cytron disk to Cyrus and asks in return to be an attorney for the state. Fitz announces it at a press conference. He then summons liv to his office where they come clean about Verna and Jake. Fitz tells her he forgives her for sleeping with Jake. Liv tells him to run with Mellie. She feels like she pushed her team so far off the cliff that she needs to pull them back.

The episode ends with Liv being hustled to a car and she sits across from the guy who was Jake’s boss all season- he’s Liv’s father!