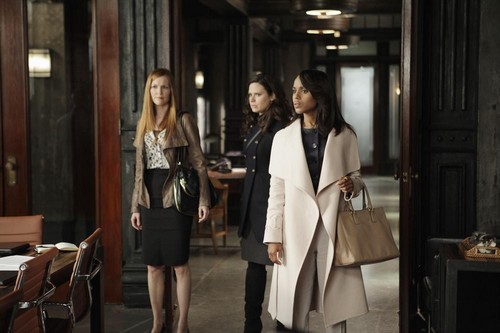 SCANDAL returns to ABC tonight with a new episode called, “Any Questions?” On tonight’s show the White House faces its biggest scandal to date. Did you watch the last episode? We did and you can catch up HERE!

On the last episode the team continued their investigation into the mole and made a shocking discovery in the process. Meanwhile Fitz ordered Jake to continue to protect Olivia, who is still very much in danger, and back at the White House Mellie’s ultimatum forced Cyrus into the role of “fixer.”

On tonight’s show the White House is in the middle of its biggest scandal to date and Cyrus is in the eye of the storm. Meanwhile, someone close to Olivia betrays her and the team.

Tonight’s episode looks like it is going to be a great episode and you won’t want to miss it, so be sure to tune in for our live coverage of ABC’s “Scandal” Season 2 episode 21 at 10 PM EST! While you wait for the recap, check out s sneak peek video and some pics from tonight’s episode below!

Tonight’s explosive episode of Scandal begins with Cyrus suffering through a press conference where a million questions are being hurled about Mellie’s statement to he press about Fitz screwing around. Cyrus then goes to Fitz’s bedroom and demands entrance. Olivia wants to try to help the way he public sees things but Fitz once again tells her not to fix things.

Mellie is siting with a hairdresser who asks her all of he tough questions. Why she decided to tell the truth about Fitz now and why she didn’t name the other woman. In another room Fitz is listening to he White House team try to spin the situation when he basically informs them of what he plans to say. He intends to issue a statement informing the American people that he’s not seeking a second term. He explains to Cyrus that he loves a woman other than his wife and if he must give up the presidency then so be it.

Olivia’s office has stumbled onto new info that leads them to believe that Sally, the Vice President may be the mole. Harrison offers to help Liv because this time around she is he client. She ells him to find proof hat Sally is the mole. Huck hacks his way into Sally’s email via her teenage daughter.

\Liv meets Cyrus for coffee on Capitol Hill. He is coming off of a brutal fight with James, who broke the story of Fitz cheating on Mellie.  Cyrus realized that Mellie set James up because breaking this story would cause personal drama between them.

The hairdresser is still looking for information from Mellie and she wants a copy of the speech that Fitz  intends to give. Meanwhile Jake is trying to find Charlie before he finds Olivia. He thinks he has him but as usual Charlie slips through his fingers. Charlie turns up at Olivia’s office, surrenders his weapons and explains that he wants to hire Liv.

Mellie gets her hands on a copy of Fitz’s speech and she is stunned to realize that he’s not budging. He’s willing to throw away the presidency for another woman.  Mellie insists that he won’t throw it all away.  Charlie tells Liv that he wants a life like she managed to get for Huck.

Jake takes the video that he has of himself hooking up with Liv and he gives it to his boss. Huck is in charge of Charlie and Charlie gives up the name of the mole. Quinn walks in just as Huck is about to kill Charlie and she starts to talk him out of it.

Liv finds out that Fitz never filed the paperwork for reflection and confronts him about it. She thinks he never filed it because he was afraid he couldn’t win on his own.  Fitz makes his speech and tells the press that his marriage is no one’s business and that he’s running for re-election.  Harrison calls Liv and tells her that Charlie played them and got the defiance card from the safe and that Billy Chambers is the mole. Tune in next week for more Scandal.