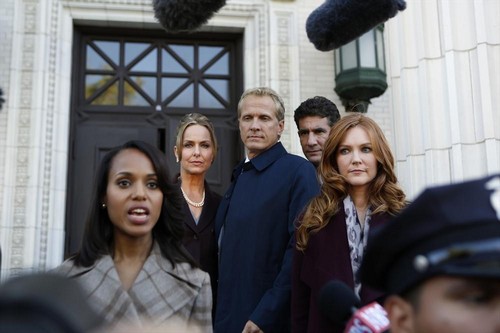 SCANDAL returns to ABC tonight with a new episode called, “Say Hello to My Little Friend.” On tonight’s show Mellie gets herself into her very own special.   Did you watch the last season’s finale? We did and you can catch up HERE!

On the last episode a Midwestern mom hired Pope & Associates under mysterious conditions that led to a very dangerous situation. Meanwhile, Fitz and Mellie admited their true feelings for each other.

On tonight’s show with Pope & Associates still struggling to find clients, the team decides to take on a philandering senator who enjoys taking photos of his not so public areas.  Meanwhile, Mellie gets involved in her own scandal with Democratic Congresswoman Josephine Marcus.

Tonight’s episode looks like it is going to be a great episode and you won’t want to miss it, so be sure to tune in for our live coverage of ABC’s “Scandal” Season 3 episode 4 at 10 PM EST! While you wait for the recap, check out s sneak peek video from tonight’s episode below!

Jake leves and Olivia’s phone rings it is Harrison and he tells them they got the job.  Abby gets a call and Harrison tells her the electric bill came on and he is staying on.

Harrison calls Quinn and tells him the money train arrived.

David wants one quote from Cyrus – he wants to a quote about the Senator who took a picture of his genitals and sent it to girls.  He wants just one sentence from Cyrus and he promises to leave him alone.  Cyrus says, no comment.

Pope & Associates decides to take on a philandering senators who likes to send pictures of his privates out.  He is also being accused of kill Ms. Oaks, his  prints were found all over her apartment.  The senators wife talks to Olivia and tells her, her husband is a better man now and only made one mistake and deserves a second chance.

The press surrounds Olivia and the Senator to find out about why he killer Ms. Oakes.   Olivia tells the press he did not kill the girl, the only thing he is guilty of is bad judgement.   They walk into court, in court they read e-mails from the Senator and he is a total douche and the e-mails are not good.  The jury does not look like they like him.

Fitz is reading the paper and he sees Peter Foster is dead.

Ms. Oakes parents go on TV they are not pleased about how they are trying to paint their daughter.  They tell the press their daughter was a good person.

Quinn comes to see Huck, she tells him she was worried about him.  She is worried because he is not talking to her anymore.  Quinn wants to know if he killed someone and it felt good, like a high.  Huck walks away.

Huck goes to the garage and Huck is there they point guns at each other.  Jake tells him he wants to talk.

Jake tells Huck that Olvia’s father owns them all.  Jake wants to kill him.  Huck tells him no one takes down command and Huck leaves.

Cyrus is upset at Quinn because when she was talking to a Mellie and made some nasty comments about the Congresswomen and the mike was still on.  Everyone heard.  Cyrus is afraid Quinn gave the Congresswomen the election.  Cyrus tells Quinn they are having problems with the women voters and her comments did not help.

There is a girl being interview on television and she claims the Senator sent her a text message.  The Senator denies it and then later admits it he tells his wife he has a problem, he could not help himself.  She tells him not to touch her.

Fitz is finding out about officer Foster – Fitz was in the Navy at the same time as him and when he finds out that Foster was going to be buried in a pauper’s grave he made arrangements to have him buried in Arlington.  Fitz goes to the funeral and tells his sister that her brother was an American hero and he deserved to be buried this way.  His sister is touched.

The Chief of Staff’s husband James is totally pissed off at Cyrus because they did not tell him about the President arranging Pete Foster’s funeral.  Cyrus tell him he did not know.

Cyrus meets with Rowan/Eli and he asks why Pete Foster was killed.  Unbeknownst to them Jake is listen but he does not hear all the microphone is not great.

Olivia is refusing to quit the case of the Senator, Harrison begs her to consider it but she won’t. Harrison is concerned the Senator keeps lying to them.  They leave and Jake comes in, he tells Olivia that her father had Pete Foster killed.  It was about a flight plan and he wants to know if she knows.  She tells him to leave and take his files and conspiracy theories with him.  Huck overhears.

Huck listens to a recording and it is Rowan/Eli talking about how Pete Foster had the original flight plan.  Huck has some flashback memories.

Mellie keeps apologizing to Cyrus because the Congresswoman’s approval rating has gone up since her mike being on.

Cyrus sends Ethan Out to get some good old fashion dirt on the Congresswomen.

Abby walks in to see?? he won’t let her bring 6 more witnesses.  He knows  Shelly Myers has disappeared.  The team meets at Pope Associates and they are trying to track down Shelly Meyers.  They finally finally find Shelly she speaks to Olivia and tells her she is suppose to be a role model to her daughter.  She is drinking and Olivia tells Shelly if she does not testify in court her husband is going to go to jail.  Olivia tells her she knows a good divorce lawyer that is the best revenge.  She convinces Shelly to testify.

On the stand Shelly testifies that her husband was with her at the time of Ms. Oakes murder.  The prosecutor goes after Shelly.  He asks Shelly if she loves her husband, she says she hates her husband.  BUT, you don’t put someone in jail for being a lying, cheating bastard and he did not kill the girl.

Huck is looking at slides of a dead body, Quinn comes behind her and asks if he is looking at the man he killed.  He gets up and walks out as Quinn beseeches him not to do it alone.

Over at Olivia’s Jake shows up again, he wants to talk to her.  Jake comes in and tells Olivia that the dead man had coordinates tattooed on his body.

Ethan comes in to see Cyrus and tells him that he got nothing except that the Congresswomen Josephine walked into a clinic at 15 and was pregnant, when she walked out she was no.

Senator Myers tells Olivia he did not realize how much his wife hated him.  Olivia tells Senator Myers that she may forgive him and the Senator tells Olivia she will never forgive herself.  It seems that Shelly Myers lied she was not with her husband and she could not have given him an alibi.

The jury comes back and Senator Myers is Not guilty.

Olivia leaves the court and grabs Shelly Myers – Olivia realizes it was Shelly who killed Ms. Oakes and confronts Shelly.  She admits it and tells her everyone deserves a second chance.

Fitz and Cyrus are talking and he tells Fitz he has to stop dredging up the past.  They have to leave the past where it was.  He tells the President he heard he went to the funeral of Pete.  He tells the president they cannot allow the past to be brought back.

Abby sends a picture to David over his phone.  David tells her he does not want to play games, she tells him she is outside his door and she wants to come in.  He answer the door and pulls him in.

Jake and Olivia are drinking wine.  Jake asks if she is okay and she tells him she does not know what she is.   Olivia is scared, Jake tells her to put her head on his shoulder.  He tells her she is not alone and he is going nowhere.  They kiss each other.  The get interrupted by the phone. Jake asks her not to answer, she says it may be important.