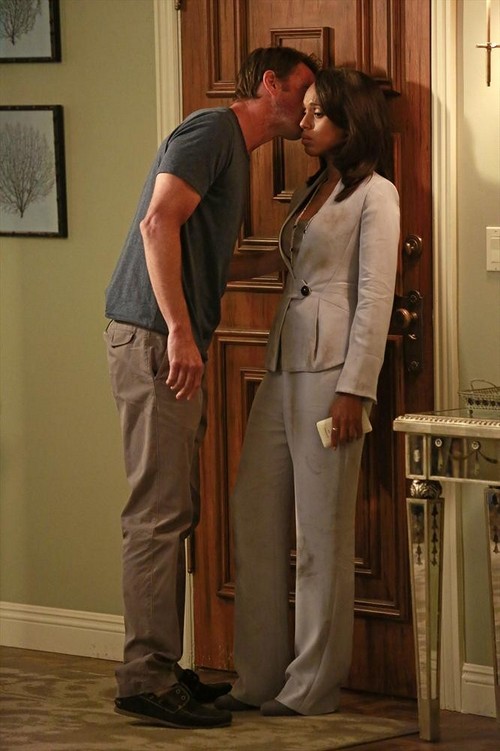 SCANDAL returns to ABC tonight with a new episode called, “Mrs. Smith Goes to Washington.” On tonight’s show the Gladiators are hired under mysterious conditions. Did you watch the last season’s finale? We did and you can catch up HERE!

On the last episode through flashbacks we learned more about Olivia’s estranged relationship with her father. Meanwhile, both the White House and  Pope & Associates were still in the middle of cleaning up the very big and very public mess they created.

On tonight’s show a Midwestern mom hires Pope & Associates under mysterious conditions that lead to a very dangerous situation. Meanwhile, Fitz and Mellie admit their true feelings for each other.

Tonight’s episode looks like it is going to be a great episode and you won’t want to miss it, so be sure to tune in for our live coverage of ABC’s “Scandal” Season 3 episode 3 at 10 PM EST! While you wait for the recap, check out s sneak peek video from tonight’s episode below!

Huck needs some time to himself. He doesn’t even want to help Olivia are talk it over. He’s too busy stalking Eli Pope. So she tells her associates that he’s taking a personal day not that they could have guessed they were allowed personal days. It’s definitely new.

Frankly no one has time to discuss what Huck may or may not be doing. They got a new client that gave them a hefty retainer. Yet when Quinn started to look into the woman as she has been doing to everyone lately she finds out that their client emptied her bank account just to pay them. Olivia gets worried and follows where the woman went. Once she enters the capitol she sees people running away but doesn’t take their actions as precautionary. She enters the room to find her client, Mary, strapped with a bomb holding prisoners.

Earlier that day Cyrus was telling Fitz and Mellie that their numbers were done since the while affair fiasco. They need some good press and that’s why he’s making them go away on a romantic holiday. To make it seem like they’re trying to work it out. They never got to make it to their trip from hell. A man tried to break into the oval office the same time Mary took a Senator prisoner.
She had contacted the congressman about her son. He was killed under the patriot act. The FBI believes he was a terrorist but they won’t explain to his mother why they made that assumption. Until they do she’ll refuse to listen to what anyone is telling her. She wants her son’s declassified file. If she doesn’t get it then she’ll detonate the bomb.

In the meantime the man that tried to see the president was ruled unrelated to Mary’s situation. Yet they won’t arrest him. Cyrus told the officers to release before making a call to Eli who is still be followed by a gun wielding Huck.

Olivia convinced Mary to let go of some of the hostages. As a show of good faith. Mary does but she’s not getting that file. Instead they set up sniper rifles and the shooter is just going to hope that Mary won’t have enough time to detonate. Olivia saves Mary from the shooter, much to the Congressman’s dismay, and she’s willing to keep going with negotiations for Mary.
Fitz didn’t know she was in the building until she took Mary position in front of the rifle. She tries to reach the White House using Jake but Fitz won’t let another man play hero. Jake says he couldn’t help instead of what Fitz actually did when he speaks to Olivia.

Back at the hostage situation, a woman claiming to be FBI approached Harrison with a tape of Mary’s son. It’s a recruitment video. It proves Mary’s son was a terrorist. But then Harrison saw the woman entered a government car that doesn’t belong to the FBI.

They get Rosen to look into and he proves an admirable foe for Cyrus. He gets the man to admit what really occurred. Her son was not a terrorist. He was CIA. He infiltrated a terrorist organization and he helped other operative infiltrate. Mary must never know who her son was. That will risk the other men and women serving. Fitz is that one that has to break that to Olivia. She didn’t want to tell Mary the lie but she did. She couldn’t risk others.

Mary couldn’t take the “lie” about her son. The soldiers outside grabbed the congressman and Olvia leaving Mary alone in the room. They did their bet to evacuate but some were still caught in the blast when Mary detonated the bomb. Only Mary was a casualty.

Olivia is dazed afterwards. Quinn makes her snap out of it. She tells her that she traced Huck to Eli Pope. She knows Huck has been looking into him. Olivia returns to the office where she finds Huck. She needs to know if he killed her father. He didn’t.
He tried to but when Eli gave him an order, he couldn’t refuse. He killed the man that broke into the president’s office. Huck didn’t know that Eli could still control him that way.

Hearing Huck’s confession makes her suspicious. She goes to Jake and asks how is he there? Is Jake a spy for her dad? He doesn’t know why he was released. But Olivia does. She knows her father still owns the both of them.