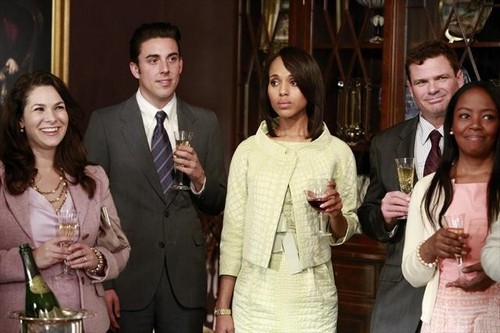 SCANDAL returns to ABC with a new episode called, “Boom Goes the Dynamite.” On tonight’s show Fitz is still struggling with whom to trust and how to handle a delicate hostage situation. Did you watch last week’s show? We did and you can catch up HERE!

On last week’s show after discovering the truth behind defiance, Fitz was still struggling to figure out whom he can actually trust. Meanwhile Olivia was trying to move on with her life, and she met a handsome stranger, Jake Weston (Scott Foley), who sparked her interest.

But when Fitz and Olivia were forced to be in the same room again, real sparks fly and things got heated. Back at Pope & Associates, the team handled a new case, and for the first time they were working with David Rosen instead of against him.

On tonight’s show Olivia and the team are hired by an up and coming politician, Peter Caldwell (Eric Mabias), but this time instead of fixing a scandal, they’re playing high-powered matchmaker. Meanwhile, David is trying to leave the past behind him, but when he feels like he’s being followed, he finally turns to the team at OPA for help. 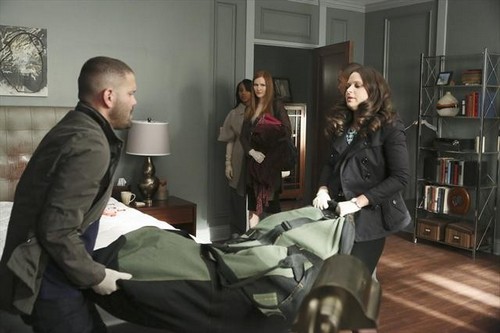 Back at the White House, Fitz is still struggling with whom to trust and how to handle a delicate hostage situation, and Jake just won’t take no for an answer when it comes to dating Olivia.

Tonight’s episode looks like it is going to be a great episode and you won’t want to miss it, so be sure to tune in for our live coverage of ABC’s “Scandal” Season 2 episode 15 at 10 PM EST! While you wait for the recap, check out s sneak peek video and some pics from tonight’s episode below!

If you saw last week’s episode then you already know that Olivia is going head to head with Captain Jake Ballard. She believes that he can help her understand some secrets about an operation called albatross. What she doesn’t know is that Jake’s house is wired with video surveillance of Liv’s house.  He goes on a brief date with Liv and after she cuts it short Jake heads into a meeting with Fitz. It’s clear that Jake has been hired by Fitz. He gives Fitz all the itty bitty details of Olivia’s life, right down to the fact that she’s swimming on a daily basis. Jake thinks Liv is harmless but Fitz corrects him and informs Jake that Olivia is not a good person.

Olivia knows that Albatross is actually a mole and they need to find him or her. David knows he’s being followed and they all fear that he’s a dead man walking.

Liv is also handed a case that is a bit unusual. She is trouble shooting to help a single, straight, celebate guy named Will Caldwell make it into the governor’s mansion. Olivia says there is no way the general public is going to get behind a man with no personal history so they set out to find him a wife. Meanwhile back at the office everyone is gone except Abby and as she goes to leave she finds David waiting. They have a hot hook up on one of the office desks , proving that their chemistry is alive and well.

On last week’s episode Fitz was dealing with a hostage crisis with the hostages actually being incognito FBT agents. The White House receives video of one of the prisoners holding a copy of the days paper and all of Fitz’s staff watches in horror as the screaming guy is beheaded.

David is extra jumpy and teaching class when something bounces off the classroom window. He’s a jangled wreck and sitting outside in a car is Huck.

Abby takes a few minutes to chat with Caldwell’s potential wife and manages to scare her off . As Rosen tries to leave school he knows he’s being followed and he tries to call Huck for help. Huck is still outside but he’s having flashback’s and ignores his phone.

Cyrus realizes that Mellie is working behind the scenes to turn Fitz against him.  Liv suggests that he just wait it out because she always go too far eventually. Cyrus goes back to Mellie and plays nice. He pretends that he has no clue what she’s doing.

As Liv is getting ready to go out Harrison calls to let her know that one of the girls that auditioned to be Caldwell’s wife talked to the press and told them everything.

Liv thinks on her feet and realizes that the leak is Caldwell’s sister-in-law who he has been sleeping with. Liv confronts him and points out that he has absolutely nothing more than stolen moments that ultimately amount to nothing. He has nothing and it will never become anything.

Fitz is furious because he realizes that Mellie tried to take control of the hostage crisis without him. Just like that she is on the outs and Cyrus is back in the loop. The person following David tells him that Osbourne killed Wendy and Liv knows that whomever killed Wendy is responsible for the hostages being kidnapped. Tune in next week for more.