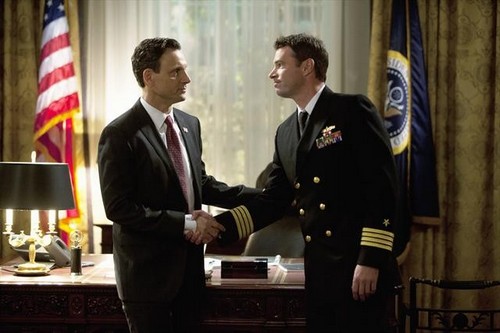 SCANDAL returns to ABC after a one month hiatus with a new episode called, “Top of the Hour.” On tonight’s show nothing is ever what it seems. Did you watch the last episode? We did and you can catch up HERE!

On the last episode Olivia and the team were hired by an up and coming politician, Peter Caldwell (Eric Mabias), but this time instead of fixing a scandal, they were playing high-powered matchmakers. Meanwhile, David was trying to leave the past behind him, but when he felt like he was being followed, he finally turned to the team at OPA for help.  Back at the White House, Fitz was still struggling with whom to trust and how to handle a delicate hostage situation, and Jake just would not take no for an answer when it comes to dating Olivia.

On tonight’s show Olivia finds herself in the middle of a media storm, but this time she’s on the opposing side of the oval office when Fitz’s pick for Supreme Court Justice is caught in a torrid affair with Liv’s new client, high-powered CEO Sarah Stanner (Lisa Edelstein). Meanwhile, Olivia and Jake continue their flirtatious relationship, while Huck takes Quinn under his wing and Harrison and Abby try to figure out where they stand with their friendship. Back in the White House, Cyrus and Mellie continue to fight for Fitz’s attention, but someone else may already have it

Tonight’s episode looks like it is going to be a great episode and you won’t want to miss it, so be sure to tune in for our live coverage of ABC’s “Scandal” Season 2 episode 16 at 10 PM EST! While you wait for the recap, check out s sneak peek video and some pics from tonight’s episode below!

Fitz has finally chosen a new pick for Supreme Court Justice but as the press has done their typical round of digging they unearthed the fact that he had an affair years ago with Sarah Stanner who is a high powered CEO. She’s also Olivia Pope’s latest client. Liv and her crew are sitting outside Sarah’s home waiting for a shot to get inside./ At the top of the hour, when all of the news agencies are doing fresh reports they sneak in. Sarah is told to ship her kids to a relatives and understand that normal life ended hours ago. Her trash, bank statements and prescription drug history is all fair game for the press. She tells Liv that Murray was her law professor and they had an affair 15 years ago. Everything she’s accused of is true.

Meanwhile at the White House Cyrus is flipping because he thought that Murray Randall was clean and  once again Fitz exercised bad judgment.  Liv has suggested that Sarah tell the truth and so she addresses the press and admits to a brief affair 15 years ago. As soon as she speaks Cyrus calls Olivia flipping out warning her that they will fire back. Fitz tells Murray he has no control of how the situation is handled. Sarah’s emails get leaked and the White House turns it so it gets twisted  and just like that Satah is a stalking sexual predator. That accusation leads her company to believe she’s in breach of a morals clause and they insist she step down.

Mellie catches a glimpse at Fitz’s real schedule and believes that he has a double schedule- one for her eyes and the real one. She confronts Cyrus about her husband’s activities and fears divorce is coming again. Liv and Jake are still exploring their weird flirtation. Jake shows up on her property and looks terrified when a paparazzi opens the gate and takes a photo of them together. I wonder what Fitz will think of that.

Sarah and her husband are still holed up at home when the news says that it was uncovered that time stamps on the emails don’t match Sarah’s supposed affair time line.  She admits that she lied and her husband does the math and questioned whether or not he is the father of their oldest child, before storming out into the sea of press camped outside their door.

Liv’s phone rings and it’s Fitz. It’s that scene we’ve waited for, you know where he finally talks to her and asks why she didn’t tell him she didn’t have faith in him. He thinks Liv thought he shouldn’t have been president in the first place and that has ruined him. She saus she’s ruined too for the mistake she made. Liv hangs up and both of them are left gutted.

Liv goes in to check on Sarah and they share a $300 bottle of wine. Sarah says that she saved it for an occasion and having her husband call her a whore feels like an occasion. Her husband wants a paternity test and she’s not sure that he’s the father.  Olivia tells her betrayal always comes with a price but at the time, she made the decision that she thought was best.

Harrison and Abby are hellbent on saving Sarah’s job and so as the board is meeting they stroll in with an empty box and bluff. They say it contains all of the dirt that they found on board members. They decide Sarah can stay on.

Sarah’s husband opens the paternity results and rips them up. He realizes that he is Annie’s father, period.

Fitz set into motion a plan using Jake to free the hostages. Mellie strolls into Cyrus’s office and tells him that she was wrong, Fitz is cheating on him and she hands him a photo of Jake. Tune in next week to see what happens next!