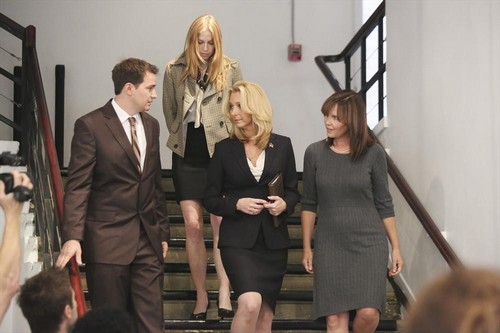 SCANDAL returns to ABC tonight with a new episode called, “More Cattle, Less Bull.” On tonight’s show the team gets closer to the truth behind operation Remington.   Did you watch the last week’s episode ? We did and you can catch up HERE!

On the last episode Pope & Associates was still struggling to find clients, the team decided to take on a philandering senator who enjoyed taking photos of his not so public areas.  Meanwhile, Mellie got involved in her own scandal with Democratic Congresswoman Josephine Marcus, when a mike was left on and their conversation was heard.

On tonight’s show the team investigates Democratic Congresswoman Josie Marcus, while Olivia and Mellie have a surprising run-in during the White House Correspondents’ Dinner.  Meanwhile, Jake and Huck get closer to the truth about Operation Remington, which could lead to devastating results.

Tonight’s episode looks like it is going to be a great episode and you won’t want to miss it, so be sure to tune in for our live coverage of ABC’s “Scandal” Season 3 episode 5 at 10 PM EST! While you wait for the recap, check out the sneak peek video from tonight’s episode below!

Montana is where Olivia Pope’s associates find themselves at the start of tonight’s episode. Congresswoman Josie Marcus had a child at age fifteen, gave it up and decided never to look back. She is considered to be a presidential contender and needs Olivia to make this whole issue stay as far in her closet as possible. She believes that maybe 5 people back in Montana could talk to the press so Liv’s team heads there to do preemptive damage control. Josie doesn’t realize that Cyrus already knows about her baby and intends to use it against her.

Meanwhile Liv has a tense Sunday dinner with her father and when Rowan leaves he returns home to sense an intruder. Jake is indeed in his house, hacking into his computer to try and get info on the top secret Remington. Jake gets the files copies and gets out in time. Huck is doing surveillence on Rowan and spies on a meeting between him and Fitz. Clearly there is a lot of unanswered questions all over the place here.

Fitz calls Jake to talk and the two pick up a quick game of basketball before the tone turns serious. Meanwhile Cyrus calls Olivia to see if she’ll dig up dirt on Josie for the While House. Needless to say she tells her team that the White House is also sniffing around. Fitz makes a tense phone call to Rowan telling him to back off of Jake but Rowan tells him no deal. It’s pretty obvious that these two have locked horns before. It’s also obvious that Fitz might be the only one that Rowan can’t control.

In one days time Olivia’s team digs up the fact that Josie’s sister Candy is actually her daughter. When she gave her up rather than be adopted Candy stayed in the family and Josie’s mother pretended she was hers. Liv tells Josie that this info will be thrown out for public consumption in no time and it’ll ruin her chance to run a successful presidential campaign. Josie emphatically says that she doesn’t want her sisters life ruined. She’ll walk away from politics if necessary.

Fitz pulls Cyrus aside and asks him about shutting down Rowan’s division by pulling the necessary funding. Cyrus freaks out and tells Fitz never to consider eliminating it or he’ll end up having a grassy knoll moment himself like the last guy did.  The Democratic convention gets underway and right off the bat Josie is cornered by allegations that she’s dishonest. Cyrus, Fitz and Mellie are watching on television expecting her to fail. Instead she tells the truth about being young and stupid at 15 and realizing her baby deserved better. Josie wins over the audience but her sister Candy puts it all together as she speaks.

Liv goes to her office to retrieve her Fitz phone from the garbage and he calls as she walks through the door. Olivia always writes Fits’ jokes for The White House Correspondents dinner and she suggests that he laugh at himself. It’ll make it impossible for anyone else to do it. Fitz tells Liv he loves her as Mellie listens from the next doorway.

Liv decides to take Jake with her to the White House Correspondents Dinner. At one point it appears that Liv is being taken to talk to Fitz but when she gets to the suite it’s Mellie who is waiting for her. The conversation is beyond shocking. Mellie asks Liv to come back and run Fitz’s campaign. Mellie has come to the conclusion that Olivia is her husband’s everything and without her he will never survive another election bid.

After Mellie and Liv talk she returns to find Jake furious. He tells her that he wasn’t her date but an excuse to see Fitz. Jake gets home to find Huck waiting for him. He thinks he has been putting everything together and he thinks that Fitz shot down a plane over Iceland that was carrying Liv’s mom. The episode ends with both Huck and Jake at Liv’s door. Tune in next week for more Scandal!