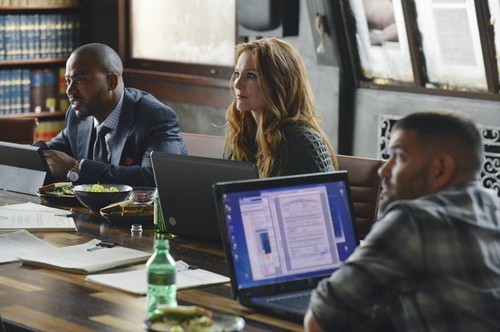 SCANDAL returns to ABC tonight with a new episode called, “Icarus.” On tonight’s show Mellie’s strength is pushed to the limits.   Did you watch the last week’s episode ? We did and you can catch up HERE!

On the last episode Olivia had to make a very important decision that would affect all of her relationships in the White House, and Harrison’s allegiance to the Gladiators was tested. Meanwhile, the team continued to prep Josie Marcus while Cyrus and Mellie plotted against her.

On tonight’s show Mellie is still trying to recover from the public backlash of the last year so she decides to do a hard-hitting news interview. Meanwhile, as Cyrus continues to plot against Sally Langston, we learn how Fitz, Mellie and Cyrus became a team. Back at OPA, Huck continues to push Quinn away, but Quinn’s bloodlust could get her into some dangerous situations.

Tonight’s episode looks like it is going to be a great episode and you won’t want to miss it, so be sure to tune in for our live coverage of ABC’s “Scandal” Season 3 episode 7 at 10 PM EST! While you wait for the recap, check out the sneak peek video from tonight’s episode below!

Tonight’s episode of Scandal begins with Mellie giving a tour of the White House when she flashes back fifteen years to the time when she and Fitz first met Cyrus. They were introduced by Fitz’s father and it was considered to be their first step towards the White House. Last time we saw Liv she was explaining to Fitz that on that mission that he did years ago that involved shooting down a jetliner, he actually ended up killing her mother. Fitz calls Liv and apologizes for what he has done to her. He tells her that there are details that he can’t reveal and Liv is devastated to realize that she is just surrounded by murders. Live hangs up on Fitz and heads into work. Once her whole staff is together she explains that they have a new client- her mother.

I love when Scandal gives us flashback sequences to better understand the characters that we love now. Tonight we get to see a whole different side to Mellie and Fitz, back when they were obviously in love and truly connected. Cyrus started working with them on blazing a trail towards the White House and he wanted Fitz to run as a war hero. Even then Fitz was uncomfortable about his war history and refused to run based on it. Meanwhile Liv explains the whole situation to her team and they jump on the case trying to figure out all of the missing details.

Fitz’s father was a Senator and in flashback’s we see him fighting with Fitz over Remington and how Fitz was given an order to shoot down the plane and he did as directed. His father thinks that his son is worthless and that everything good that comes his way is based on name rather than ability. Cyrus stormed out when he realized that father and son are at war but Mellie chased after him and convinced him to stay.

Abby is obviously feeling the pain that Liv is carrying and while Liv has a no hugging rule Abby tells her that she’s going to hug her. After about ten seconds Liv settles in and seems comforted by it. Abby later talks to the gate agent that checked in all of the passengers on that ill-fated flight and she says that Federal Marshalls removed someone from the flight before it took off. The guys name was Omar and his family still believes that he is dead.

Fitz’s father actually told Mellie that Fitz shot the plane down because there was a dirty bomb on it. According to him it would have gone down over London anyway and the reprecussions would have been crushing. Mellie looks crushed and doesn’t see Jerry, Fitz’s father moving closer. He tells her how beautiful she is and rapes her on the couch.
[10:59:54 PM] Cate Meighan: Mellie heads upstairs afterwards to get a shower but Fitz drags her into bed and tells her that he believes that he is ready to be Governor. Back to present day Mellie and Fitz, the couple is sitting for an interview together and it’s more than a little ironic that Fitz had the affair but Mellie is in the hot seat. Fitz interrupts the interrogation and demands that the interviewer back off.

Quinn has been taking shooting lessons from Charlie and after a few stolen kisses he convinces her to help him with a little job. Quinn ends up killing a security guard and Charlie is then long gone when she tries to make contact.

In another flashback Mellie sits down to breakfast with Jerry and basically demands that he repair his relationship with his son to buy her silence. This is the first episode that makes us really understand her every time that she talks about how much she sacrificed for Fitz.

Rowan makes sure that the link to Omar is killed and guess what, that’s who Quinn just killed. She tries to get Huck on the phone and Charlie stops her. He tells her she’s one of them now. Rowan also visits a woman in a cell and he says to her, “Our daughter has been asking about you.” Is Liv’s mom alive? Tune in next week!