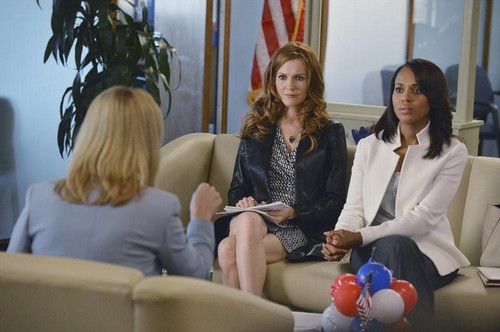 SCANDAL returns to ABC tonight with a new episode called, “Icarus.” On tonight’s show Olivia and the team search for answers as the Presidential election approaches.   Did you watch the last week’s episode ? We did and you can catch up HERE!

On the last episode the team investigated Democratic Congresswoman Josie Marcus, while Olivia and Mellie had a surprising run-in during the White House Correspondents’ Dinner.  Meanwhile, Jake and Huck got closer to the truth about Operation Remington, which could lead to devastating results.

On tonight’s show Olivia must make a very important decision that will affect all of her relationships in the White House, and Harrison’s allegiance to the Gladiators is tested. Meanwhile, the team continues to prep Josie Marcus while Cyrus and Mellie plot against her.

Tonight’s episode looks like it is going to be a great episode and you won’t want to miss it, so be sure to tune in for our live coverage of ABC’s “Scandal” Season 3 episode 6 at 10 PM EST! While you wait for the recap, check out the sneak peek video from tonight’s episode below!

Okay Gladiators, it’s show time. If you saw last week’s episode of Scandal then you already know that the hour wrapped up with Jake and Huck putting together a scenario that actually had Fitz, back in his military days, shooting down a plane that carried Liv’s mom. Tonight we are picking up right there with Liv demanding to get answers from Fitz. She storms into the white House and everyone assumes she is ready to run his campaign again. She firmly demands to talk to Fitz alone and the Oval Office clears out. Liv demands to know whether Fitz was really a part of Remington or if it was a cover story. Fitz stonewall’s about protecting government classified info, making it clear that he is lying.

Liv storms out telling him that she will not work for his campaign. Instead she opts to help Josie Marcus win the presidential race. After olivia leaves Fitz tells Cyrus that Liv knows everything about Remington, absolutely everything. Meanwhile Liv immediately throws herself into prepping Josie on how to deal with media and come out the other side winning.

Liv returns home to find Jake waiting as usual. She tells him that she needs more info because this case is about her mother. As Jake reassures her that he’ll get more dirt, Cyrus meets with Rowan and tells him that Jake has told Liv the truth. Rowan tells Cyrus to worry about running the White House and he’ll take care of Jake.

Cyrus gives Harrison a phone call and asks him to discourage Olivia from representing Josie. Fitz asks Cyrus why he isn’t worried about anything and cringes when Cy tells him that it’s being taken care of. Jake has broken orders and that just doesn’t happen. We get a flashback scene of Olivia’s father beginning to tell her that her mother died and it prompted her to call her father. She asks him what the last thing that he said to her mother was. She totally breaks down on the phone and mentions that she can’t form attachments because her mother is dead and that her father is the thing that goes bump in the night. He allows her one question and denies giving the order to kill her mother and then tells her to leave the past.

Olivia seems to have her hands full with trying to get Josie to sell herself in the best way. She’s funny when talking foreign policy and shoots down comments about her legs. When Cy called Harrison he dropped a nugget of info about a man named Solief. Harrison does his research and then asks Huck to help him keep Solief out of the country otherwise he’s a dead man.

Fitz and Mellie sit down to dinner with the VP Sally and her husband and try to make nice to keep everyone on the same page. Quinn is spending quality time at the firing range, morphing herself into a baby Huck style assassin.

Josie is about to do an interview with James when she sees her competitions ad campaign. It causes Josie to go completely off about how a woman can run the White House. Olivia looks on with a huge smile as we see Cyrus getting a phone call confirming what he had already expected, Sally is gearing up to run against Fitz. Jake had asked an old friend to get more info for him and as he meets her in a dark alley someone puts a bullet in her head. Her bag contains a gun, not the file he had expected.

Quinn is at the firing range again and the same guy helps her as usual The thing is he reports back to Rowan who obviously wants Quinn to work for him. Jake realizes that Fitz put a security detail on him and goes to the Oval Office to thank him. Jake asks Fitz all of the obvious questions and gets nowhere. Fitz decides to pay Olivia a visit and she asks him about the plane that he obviously shot out of the sky. The thing is he obviously had no clue that her mom was on board. Tune in next week for more Scandal.