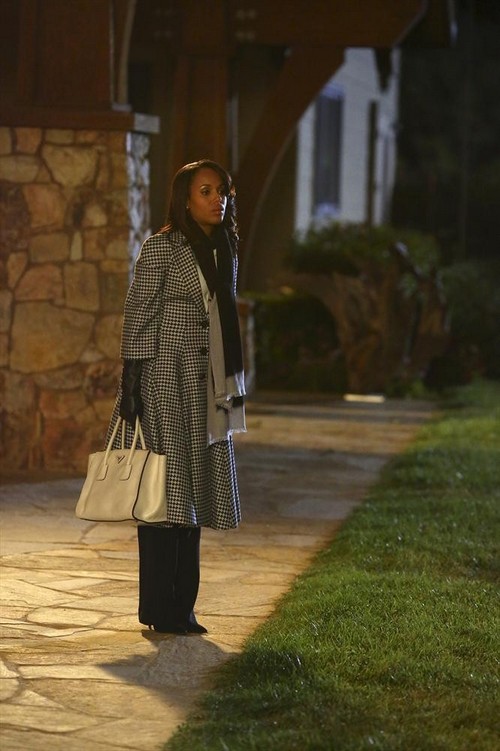 SCANDAL returns to ABC tonight with a new episode called, “Vermont is for Lover’s, Too.” On tonight’s show the team is on a mission to find Omar Dresdan and Cyrus will stop at nothing to take down Sally Langston.   Did you watch the last week’s episode ? We did and you can catch up HERE!

On the last episode  Mellie was still trying to recover from the public backlash of the last year so she decided to do a hard-hitting news interview. Meanwhile, as Cyrus continued to plot against Sally Langston, we learned how Fitz, Mellie and Cyrus became a team. Back at OPA, Huck continued to push Quinn away, but Quinn’s bloodlust could get her into some dangerous situations.

On tonight’s show Olivia and the team try to handle both uncovering the truth behind Operation Remington, while also managing a potential crisis with the Josie Marcus campaign.  Meanwhile, Quinn falls further down the rabbit hole with Charlie, and Cyrus creates a plan to take down Sally, but doesn’t think of the possible harm he could inflict on himself.

Tonight’s episode looks like it is going to be a great episode and you won’t want to miss it, so be sure to tune in for our live coverage of ABC’s “Scandal” Season 3 episode 7 at 10 PM EST! While you wait for the recap, check out the sneak peek video from tonight’s episode below!

Tonight’s episode of Scandal opens with Olivia’s Dad, Eli paying her Mom, Maya a visit. He tells her that Olivia has been asking about her, so he will be sending her out of the country tomorrow on a plane. Maya demands Eli lets her see Olivia before he sends her away, and he says it isn’t possible.

Charlie is sitting in a car with Quinn, reminding her that he “owns her” now. He is dropping her off at work, he says she has to go to work and act like everything is normal. Then he will pick her up and she has to fill him in on all the details of her day.

Quinn is nervous, but she pulls it together and heads into the office. As if her day couldn’t get any worse, she walks in on the team trying to track down whoever killed the security guard (the same security guard that she killed). They know the surveillance tape is missing (because Charlie has it and is using it as blackmail). They don’t suspect her though, they think it was a professional hit.

James and Cyrus are arguing, James is unhappy with his mundane life. Cyrus reveals that he got a call from a man named Donnie, at the DC Times, he is looking for a write and he gave him James’ name. James is ecstatic about the new potential job.

Someone broke into Congresswoman Marcus’s (Josie) house, and stole her laptop and campaign information and files. Olivia and her team rush over to assist her.

Olivia’s Mom is trying to commit suicide, or planning a grand escape. She is biting her own wrists, and bleeding severely in her cell.

Quinn is covering all of her bases. She is trying to get all of the surveillance tapes of the buildings in the area where she killed the security guard, before the rest of the team do. Unfortunately she runs into Jake when she is collecting the security tapes, and has no choice but to hand them over to him.

A guard saved Olivia’s Mom, she is in the hospital. Eli is still planning on moving her as soon as she is stable enough.

David and Abby are arguing over Marcus’s stolen campaign files. She wants him to search Reston’s home for the files, but he says he can’t. He tells her she has to leave it up to the DC police, there is no proof that Reston is responsible.

Cyrus is scheming, he wants to prove that Daniel Douglas is gay, and he is using James as bait. His new writing job at the DC Times was all a set up.

Candace and Harrison are arguing, he is upset that she publicly accused Reston of stealing Josie’s campaign files on live television.

Olivia’s team is analyzing the security tapes Jake took from Quinn, they have determined the killer is a woman and are in the process of editing her reflection on a glass door to ID her.

Whoever stole Josie’s campaign laptop was dumb enough to turn it on, and the computer was traced to Reston’s campaign headquarters. Candace is cocky, and excited she was right about Reston stealing the laptop. She wants to demand he drops out of the race, but Olivia says no, they can’t do that yet.

Cyrus is encouraging James to make Douglass more comfortable during their interview. He helps him pick out an outfit and tells him he should do the interview in Douglas’s house to make him more comfortable.

Charlie is reporting to Eli about the security guard investigation, Eli tells him that is Quinn gets identified he must “do as he was told.”

Eli pays Maya a visit, she is awake now. He brings her a photo of Olivia, it is the first time she has ever seen what she looks like. She is ecstatic.

The president sends a helicopter for Olivia, he also sent her photos someone took of her and her Dad, Eli. She agrees to meet with him for one hour and heads to his cabin in Vermont. She tells him that her Dad is not a subject she discusses. He is upset that she never revealed who her father is, he calls he a “bundle of dirty little secrets.” Fitz reveals that the house they are standing in he had built for her, when he thought they were going to be together. He said, “This was supposed to be, me and you growing old together and raising a family together. I just wanted you to see it at least once before I sell it.” Olivia is touched, she rushes to him and kisses him.

Huck it still trying to decipher the photo of the woman in the surveillance tape. Quinn offers to stay with him, but he sends her home.

Quinn leaves, and Charlie is waiting for her outside. She pulls a gun on him, but he basically laughs at her and says she won’t kill him.

Eli and Maya are looking at pictures of Olivia, she wants to know why they are all press clippings instead of home photos. Eli confesses that they have grown apart over the years, Maya is upset, Eli was supposed to take care of her. Eli storms out and orders the Doctor to sedate her, and move her in the morning.

After a hot, steamy hook-up in their Vermont house, Olivia’s helicopter arrives. Before she leaves Fitz reveals to her that he plans on taking out her Dad, Eli, because “he needs to be stopped.” Olivia tells him to “do what he needs to do.” Before she boards the helicopter she tells Fitz not to sell the house.

David reveals to Abby that the campaign computer they found at Reston’s was wiped clean. It had no files on it, and the burglary was staged. Abby calls Harrison to tell him that Candace staged the whole break-in, coincidentally he is in bed with Candace when she Abby called.

Olivia and her team tell Josie that Candace staged the burglary. Olivia tells her that she has to fire Candace, Josie agrees.

Cyrus’s plan is right on track, Douglas makes a move on James. James puts two and two together and realizes that Cyrus set him up.

Josie holds a press conference, Olivia thinks she is going to announce that Candace staged the burglary. She gets up in front of the cameras and confesses to the burglary herself, and withdraws herself from the election. Olivia is upset that she threw her career away for her daughter.

James returns home, says hello to Cyrus and rushes to the get in the shower. After he goes into the bathroom, Cyrus receives photos on his phone of James having sex with Douglas.

Eli heads to the hospital to check on Maya, but she is gone, she attacked the Doctor and escaped.

Quinn returns home, and finds a photo of herself extracted from the surveillance tape lying on the floor. She turns the light on and Huck is sitting there waiting for her, he knows she killed the security guard, but he lied to Olivia and her team and said it was impossible to ID the person in the video. He tells her they need to discuss “who she is working for.”

Olivia is leaving the office and headed down the street, a woman calls her name and she turns around. Her mother is standing in front of her…