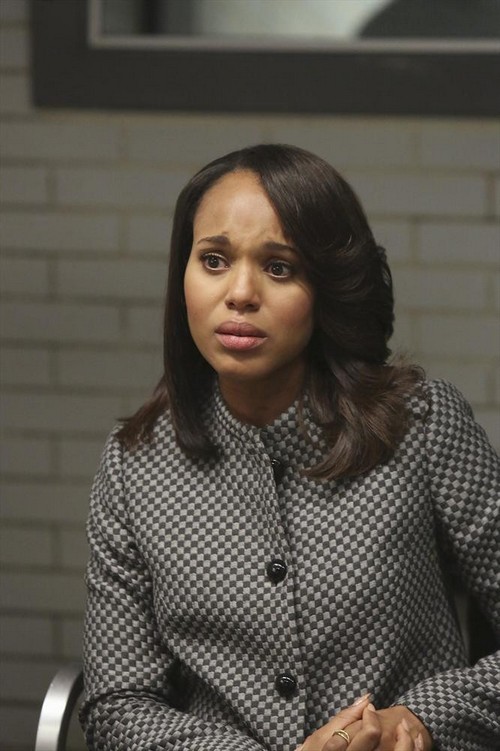 SCANDAL returns to ABC tonight with a new episode and the winter season finale called, “A Door Marked Exit.”  On the next episode it’s time to face the consequences.  Did you watch the last week’s episode ? We did and you can catch up HERE

On the last episode as the team got closer to the truth, loyalties were tested and relationships are pushed to the limit. Meanwhile, Cyrus hadto deal with his own crisis and he realized that he may have gone too far.

On tonight’s show now that the truth is out there, things will never be the same and everyone will have to face the consequences of their actions.  The episode was written by Zahir McGhee and directed by Tom Verica.

Once the show returns after the winter mid-season break in February we will get eight more episodes of this wonderful show.  It was supposed to be more but because of Kerry’s pregnancy they had to cut it down to eight.

Tonight’s episode looks like it is going to be a great episode and you won’t want to miss it, so be sure to tune in for our live coverage of ABC’s “Scandal” Season 3 episode 10 at 10 PM EST! While you wait for the recap, check out the sneak peek video from tonight’s episode below!

It’s finally here! Of course I’m talking about the second part to the winter finale of Scandal! Tonight’s episode opens with the fight between Sally and her man-loving husband, Daniel. She confronts him for cheating and Daniel tells her that he helped make her VP and now he’s out. Sally stabs him repeatedly with a letter opener. She then calls Cyrus who grimly shows up and sees the death scene as well as Sally’s face covered in blood spatter. She’s rambling about how she committed a sin as Cy flashes back to setting Daniel up for the gay encounter. He eventually throws up upon realizing he’s to blame for this homicide. As usual, Cy pushed people too hard.

Huck decided to let Quinn live because she’s still valuable and at this point he even implanted a tracking device in her tooth to keep tabs on her since she is a member of b613. Her assignment is to give Rowan a hotshot and she has an opportunity that passes in his office. Quinn ducks into a restroom and pries the tracker out of her mouth. We see Rowan driving and suddenly his car is surrounded. He is captured, shackled and brought in to an empty room to sit face to face with Fitz. Fitz tells him he’s going nowhere until Liv’s mom is off her plane and free. The problem is that Liv now seems to think her mom is actually a terrorist that needs to be caught.

Ironically enough Quinn is called in to clean up Daniel’s murder scene. Cyrus tells Sally that officially Daniel had a heart attack. He tells her to confess to god and everyone else in her head. Shut her mouth and there’s a chance she’ll be president. When the doctor comes he can’t get to close. Sally appears to be in a daze as the doctor talks at her. Just as he wants to take a closer look Sally freaks out and throws herself on Daniel. Cy talks the doc into leaving.

Cy is totally messed up when Mellie comes in to tell him the good news about Daniel. She thinks god was shining on their latest scheme but Cy believes it was the devil’s work that killed a man. Mellie tells him to pull it together before she calls Fitz to tell him the news. After hanging up the phone Fitz informs Rowan that he is screwing Olivia and finally we see this guy lose it. He points out that Fitz is a spoiled boy who never worked for anything and that using the formidable Olivia is still not going to elevate him to manhood.

Abby has gathered some info on Olivia’s mom whose real name is Marie Wallace. It appears that she was a terrorist and she will be deplaning in 8 hours. Abby suggests that after being locked up for 22 years maybe her mom has served her time.

Upon learning about Daniel’s death, James goes to talk to David. He suggests that Daniel was murdered by Cyrus but David doesn’t want to hear it. Meanwhile Huck and Jake have tracked Liv’s father to the Pentagon and Liv finds out fast. She has put together a theory that her mom sold secrets and went where the money was. Liv goes to the Pentagon and sits face to face with her father demanding answers. Liv realizes that her mother told Rowan there was a bomb on the plane that Fitz shot down years ago and that it was a lie. He ordered to have hundreds on board killed for absolutely nothing. He won’t speak an answer but he nods yes and Liv commands Fitz to have her mother arrested once the plane lands.

Fitz calls Liv and tells her that her mother’s plane never made it to Hong Kong. Instead everyone on board had a bullet in their head and she’s gone. Jake goes to talk to Olivia and in doing so he tells Liv that he is saying goodbye. He tells her that he loved her and that whatever happens next he wants her to know that.

Sally’s campaign manager tells her that her husband is in heaven and she flips and informs him that Daniel is in hell and got what he deserved. Her manager really flips when he realized she killed Daniel and called the White House for help. Also, while David blew off helping James he did some digging of his own and was able to hack into Cyrus’ phone. He hears Sally’s call to Cy admitting she committed a sin.

Liv calls her father looking for more info and he tells her she’ll never get answers from him. As Rowan walks into his office he finds Jake sitting behind the desk. He is now in charge of b613. Jake is now working with Fitz. James decides that Cyrus needs to name him Whie House Press Secretary and he’ll stay with him. Cy agrees. The episode ends with Liv getting a call from her mother, standing outside the White House!