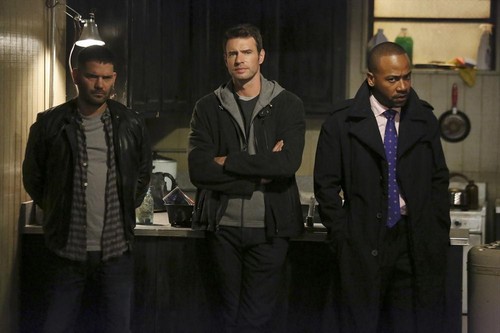 SCANDAL returns to ABC tonight with a new episode called, “Yolo.”  On the next episode which is the beginning of the winter finale it sounds like it is going to be a dramatic one – secrets are revealed and relationships are forever changed.  Did you watch the last week’s episode ? We did and you can catch up HERE

On the last episode Olivia and the team tried to handle both uncovering the truth behind Operation Remington, while also managing a potential crisis with the Josie Marcus campaign.  Meanwhile, Quinn fell further down the rabbit hole with Charlie, and Cyrus created a plan to take down Sally, but doesn’t think of the possible harm he would inflict on himself.  Olivia and the president reunited in Vermont, and he revealed he is going to take down her father Eli.  Olivia’s mother escaped from Eli, and tracked down Olivia, and Huck discovered Quinn’s dirty little secret.

On tonight’s episode as the team gets closer to the truth, loyalties are tested and relationships are pushed to the limit. Meanwhile, Cyrus has to deal with his own crisis and he realizes that he may have gone too far.

Tonight’s episode looks like it is going to be a great episode and you won’t want to miss it, so be sure to tune in for our live coverage of ABC’s “Scandal” Season 3 episode 9 at 10 PM EST! While you wait for the recap, check out the sneak peek video from tonight’s episode below!

Oh my hell Gladiators, here we go. It’s the start of the winter finale of Scandal and the opening scene is unbelievable. If you watched two weeks ago then you know that Huck found out that Quinn killed the witness that Liv was looking for. He realized that he trained her a little too well and now Huck is ready to take her out. Quinn is naked on the floor bound and gagged while Huck rambles about everything he wants to do to her, how he is going to pull her teeth out and enjoy every second. Quinn as screaming as Huck’s phone rings. Liv tells him that her mother is alive.

Everyone gathers at the safe house with not-so-dead mama Pope and Liv. She says that she realized the man that she married was a monster and planned on turning him in. That’s how she ended up being dragged off the plane and held captive for 22 years. Jake and Huck realize that command won’t let her go and they tear apart her shoulder to dig out the tracking chip. They get it out just as we see command cronies tracking the chip until it goes dead on their ipad screen.

Eli wants Liv, her crew and mother hunted down. Liv wants her mother on the first flight to Singapore. She sits down to breakfast with her mom for the first time in years and it’s awkward. She tells Liv that she is like her father and that she had hoped that by now she would have a life filled with love and laughter. Meanwhile Jake goes to Fitz and tells him that Liv’s mother is alive. Fitz wants them kept safe and Jake is insisting on taking out Eli himself. He wants Fitz to give him the resources but Fitz thinks it’s a bad idea.

Cyrus is still struggling with the fact that he set James up. He sent him on an interview knowing that the vice president’s husband would proposition him and Cyrus believed he’d be strong enough to resist. Instead Cyrus has pics of the tryst and isn’t dealing with it very well. James also tells him that he is going to meet with Daniel again, this time at their place. Meanwhile Quinn is waiting for Huck to return and is trying to find a way out. She uses her feet to knock over a glass but it falls out of reach.

Jake and his crew think that they have Rowan tracked but after an on-site explosion Rowan escapes with Charlie. He asks Charlie where Quinn is and Charlie has no idea. Huck returns to find Quinn and decides it’s time to rip out her teeth with pliers. As Fitz contemplates what to do about Liv’s mom Sally bursts in and tells him that she is running against him in the presidential election. Fitz tells her that she’ll regret it.

Cyrus decides to finally confront James and James tells him he wants a divorce. He is appalled that Cyrus basically pimped him out and so he intends to take their daughter and leave. Cy says he’s staying put because there are pictures of James with Daniel- he wasn’t setting Daniel up and not getting proof!

Fitz freaks out on Cyrus because of Sally running against him. Mellie asks Cyrus what happened with James and Daniel and Cy bursts into tears. She realizes that James cheated and tells Cy that it’ll hurt until it doesn’t.

Abby is scrambling to figure out how to get Liv’s mom out of the country and the prospects aren’t looking good. Liv calls to hear Fitz’s voice. He can’t help her she thinks, but she wants to think about their almost home in Vermont. Fitz tells her he is taking care of it.

Charlie managed to rescue Quinn from Huck and she is of course a mess. He tells her to suck it up and not cry over a few missing teeth but she explains that Huck was all that she had and he hurt her. Now she’s alone. Charlie tells her that she has him before tackling her onto the couch with a crazy kiss.

Cyrus does his job and walks into Sally’s office carrying the photos of both of their husbands’ naked together. Cyrus then calls James and tells him the photos are burned and asks forgiveness. Quinn has flipped sides completely now and takes Charlie to where Liv has her mother stashed. As Liv’s mom walks towards the plane that Fitz arranged for her Abby makes Liv go and hug her mother. Liv has a flashback and realizes that her mother is the monster, not her father. We see Quinn’s negotiating with Huck to get free and it looks like she is going to take Rowan out herself. This episode ends with Sally calling Cy and telling him she committed a sin- as Daniel lays bleeding on the floor behind her. Tune in next week for more Scandal!