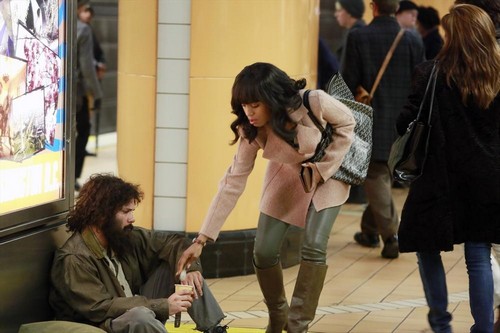 SCANDAL returns to ABC tonight with a new episode called, “Seven Fifty-Two” On tonight’s show Huck’s past is revealed. Did you watch the last episode? We did and you can catch up HERE!

On the last episode details from an old case didn’t add up, Olivia’s team had to backtrack to figure out if they made a mistake. Worse still, this mistake had potentially put them all in serious danger. Meanwhile, Olivia and Jake’s relationship started to heat up, while at the White House Fitz and Mellie’s relationship hit a new low.

On tonight’s show secrets from Huck’s life before Pope and Associates are revealed, Olivia and Fitz engage in an emotionally charged conversation, unaware of the fact that someone could be watching, and Olivia’s team comes together to help one of their own. Meanwhile, Cyrus is becoming increasingly skeptical of Jake, and Mellie makes a decision that could bring down the White House.

Tonight’s episode looks like it is going to be a great episode and you won’t want to miss it, so be sure to tune in for our live coverage of ABC’s “Scandal” Season 2 episode 19 at 10 PM EST! While you wait for the recap, check out s sneak peek video and some pics from tonight’s episode below!

Scandal hasn’t been on for a few weeks and man did they leave us hanging. Last episode Liv finally hooked up with Jake and afterwards she turned his tv on to find a million videos of each room of her house. She realized he was watching her and ended up trying to leave. They scuffled and she woke in the hospital with a concussion and Fitz in the room. He tells her he loves her and she tells him that she refuses to believe the lies.

Meanwhile Huck is curled up in a ball muttering to himself after being rescued from a locked container in a storage unit.  We flashback to him joining government operatives, his group number was b613 and he was pulled from military operations and offered a ridiculously good paying position. I’m guessing this is where he learned to kill.

Harrison and crew finds out that Liv is in the hospital and he tries to see her. That’s not happening because the Secret Service are guarding her door. Harrison over hears a fake delivery guy trying to gain entrance and the guy takes off running. Harrison chases him but loses him.

Every time they flash to Huck rocking we see more of his history, how he learned to kill- how it took a lot of skill to take various lives. We also see Huck with his girlfriend and how the job made him withdraw completely from her.

Fitz is waiting for Liv at the hospital and he has the opportunity to introduce Jake to Cyrus.  Harrison calls Liv to check on her. He tells her that Huck keeps saying 752 and she says to keep talking to him. Quinn is sitting on the floor with Huck trying to talk him out of it. She promises that he can get better and he stops chanting for a minute before beginning again. We flashback to his girlfriend telling him she’s pregnant and him proposing on the spot. He also got really good at torture and we see him chatting them up before he kills them. Huck and Kim had a son and the next time he kills, he cries his eyes out. We flash back to Abby talking to Huck and explaining how Liv saved her from a bad situation  and turned her into a gladiator. We flash back to Huck coming home to find his boss holding his son. The boss then demands he get rid of his family. Huck wants to get out of town with his family but it never happens. He is thrown into a black basement cell screaming. .He stays there in the dark for months. Every time they open the cell and ask if he has a wife and child he replies yes and they slam it shut again.

Fitz is determined to get through to Liv. He tells her that he wanted to win the election because he earned it and the people backed him. Olivia finally admits that she loves him and Fitz tells her that in the last year all that he has learned is that he can’t exist without her. She cries and kisses him but then says she can’t put herself through the pain all over again.

Fitz returns to the White House to be informed by Mellie that she’s finished and is leaving him. She threatens to go to the press if he doesn’t come to his senses quickly.

When they finally opened Huck’s cave and he denies having a family they finally let him out. Liv takes a turn with him. She tells him that he had the saddest eyes when they met and she had to help him. She gets him to come back. He tells Liv that he thinks he once had a family but he’s not sure if they were real. He thinks doing terrible things chased them away. He flashes back to his wife and son seeing him at Penn Station and not recognizing him. His boy gave him change at 7:52am.

Tune in next week for more Scandal.