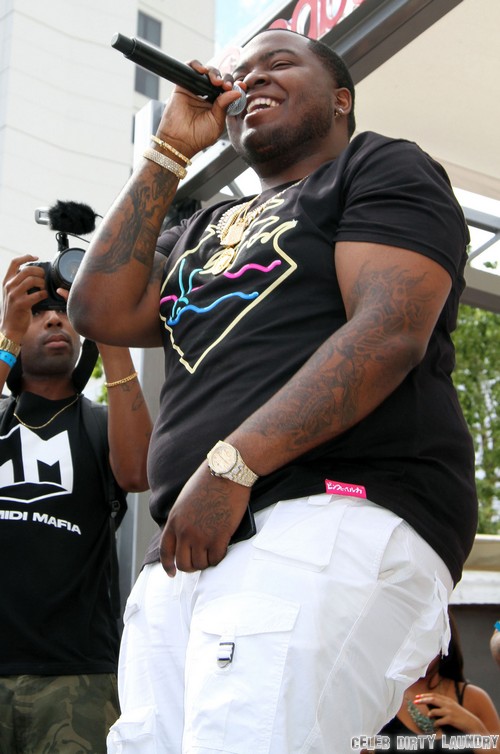 Sean Kingston and his bodyguard have reportedly been sued for raping a drunk teenager back in 2010.

Sean has already denied the allegations, but Carissa Capeleto [who is now 22 years old] claims that Sean and his bodyguard raped her in his hotel room in 2010 when she was just a teenager. According to Carissa’s claims, she was invited to Sean’s hotel room after watching Justin Bieber in concert, but she claims that Sean was naked and waiting on his bed when she showed up.

She claims that the bodyguard ‘picked her up and placed her on top of Kingston, and all three of the men proceeded to gang rape her while she was obviously intoxicated, incapable of consent.’

She adds that she was rescued by a friend, taken to the hospital to be treated, and then filed charges with the cops. The cops reportedly dropped the charges because Carissa wasn’t ‘credible enough’, but Carissa is now claiming that the incident has had a massive impact on her life, causing her to lose sleep and have massive panic attacks. She is asking for a reported minimum of $5 million in damages, but Sean continues to allege that the sex was consensual.

So just to be clear, he admits that he DID have sex with her, and there was a CRIMINAL case that was filed against him but dropped because the witness was not ‘credible enough’. You know what? This girl is probably telling the truth. First of all, I have no doubt she was drunk that night and I’m sure there’s proof in the hospital records that she was drunk that night. And then, Sean admits that he did have sex with her. That in itself is a smoking gun – if she was drunk teenager who didn’t know what she was doing and Sean still had sex with her, that’s still considered rape. It’s shocking how many people don’t know this – if a woman, much less a teenager, isn’t in a position to consent to sex, then having sex with her is rape. This reeks of Sean’s people paying off potential witnesses and hiring gonif lawyers – or somehow getting the case to disappear, because in what universe would the witness not have been credible enough? If she was taken to the hospital for injuries, she was drunk, and Sean admitted to having sex with her, why would that all lead to the officers dismissing her case when it should have done the opposite?