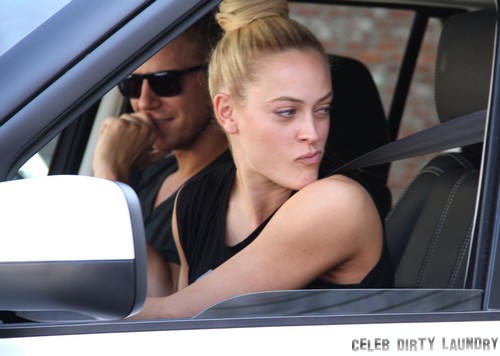 When going on a cross-country trip, you would think that the logical thing to do would be to bring your fiance, right? Just tell that to Sean Lowe!

Sean is currently engaged to Catherine Giudici, who won his heart on the season finale of The Bachelor. Afterward, he decided to compete on this season of Dancing With The Stars with Australian dance pro Peta Murgatroyd. And these two have chemistry together, too. If we were Catherine, we would totally be worried. Wouldn’t you? Look at Peta, she’s gorgeous! And they were alone together cross-country “for work”!

Sean was said to have boarded a flight in Los Angeles on April 25th for a quick appearance in North Carolina. Instead of taking Catherine as any other normal guy would do, he took Peta! He used the age old excuse that it was for work! Ha. We’re wondering if Catherine bought that one?!?

A snitch on the scene said, “It was his dance partner from the show. I couldn’t believe my eyes.”

Sean revealed that he merely took Peta so they could squeeze in some more rehearsal time. A pal of Peta’s said, “They have this amazing energy.” Uh huh.

Another spy said that when they are in public together, Sean calls Peta “babe.” Should Catherine be worried? What do you think? Let us know your thoughts in the comments!