BY Cate Meighan on April 14, 2013 | Comments: one comment
Related : Dancing With the stars, Dancing With The Stars Season 16, Reality TV, Sean Lowe, Television, The Bachelor 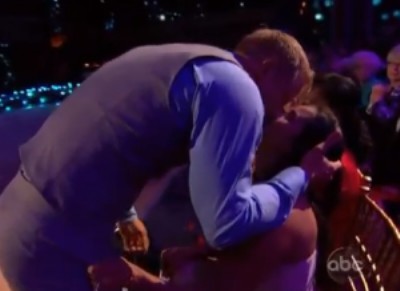 Be careful what you wish for because you just might get it- at least that’s the lesson that Catherine Giudici has spent the last month learning. She thought she struck the love jackpot when Sean Lowe offered her the final rose on the most recent The Bachelor finale. The difference a month makes is amazing. Just four short weeks ago Sean told the world that he would run to city hall tomorrow to marry Catherine if she was okay with that kind of plan. He was madly in love and couldn’t wait to make it official. Girlfriend thought she found her version of Prince Charming for a few minutes there.

Then along came Dancing With the Stars and Peta Murgatroyd, Sean’s smokin’ hot pro partner. She seems to have brought a totally different side to Sean – one that isn’t a wanna-be virginal choirboy. He spends 8 hours each day training with a sexpot and then heads home to cuddle with Catherine, when they happen to be on speaking terms that is. She moved to L.A. To be with her new man and is instead finding herself left in the dust. She fell for a family oriented guy but he seems to have completely left the building and now she’s stuck looking at fame whore Sean. The guy who supposedly throws diva tantrums on the DWTS set and invites all his pals in from Texas for frat boy type parties.

Prayer Warrior Sean is long gone and in spite of having reservations about such a clean living guy, Catherine would really like to see him emerge again. According to the April 22nd print edition of Life & Style Catherine has been crying to friends and family about how trapped and miserable she feels. It sounds like she is waiting for her first golden opportunity to book that one way flight home to Seattle.

How much longer do you think Catherine will be able to tolerate Sean before she gets the hell out of there? Tell us your thoughts in the comments below!