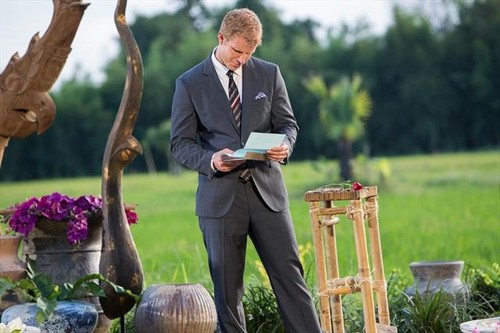 The seventeenth season of ABC’s THE BACHELOR is coming to an end tonight.  In the dramatic Season Finale, Bachelor Sean Lowe prepares to make one of the most difficult choices of this life.  Did you watch last week’s episode “The Women Tell All?” We did and we recapped it for you HERE.

On last week’s show we had the exciting “Women Tell All”   Chris Harrison spoke about the episode and had this to say about Tierra and whether his view of her changed after, “The Women Tell All,” episode. “No, not really.  I was hoping it would.  But that’s to say I don’t, I don’t hate Tierra.  I don’t think she’s a bad person.  I don’t think she’s you know the devil.   I think she is young maybe misguided in certain ways.

On tonight’s show in the dramatic Season Finale, Sean prepares to make one of the most difficult choices of this life. His search for love is now narrowed down to two very different women – Catherine and Lindsay — and he is falling in love with both of them.

Having been rejected by Emily Maynard on last season’s “The Bachelorette,” will Sean now find the love he had hoped to find with her? After having his family meet both women in spectacular Chiang Rai, Thailand, and under immense pressure, he must make one final, heart-wrenching decision that could change his life forever. One shocking twist may jeopardize his happy ending. Whom – if anyone — does a confused Sean, after much soul-searching, see as his future wife? Who will get his final rose? And will he leave single or with the love on his life?

Well Bachelor fans, it’s finally time for the final rose.  Sean is up to the final choices and it’s time for both Lindsay and Catherine to meet his parents. Sean’s mother thinks that he should already have a clear cut choice and is surprised when he says he’s undecided.  Catherine is up first when it comes time to talk to Sean’s mom. She says she felt a bond when he told her he loves how her nose crinkles.  His parents think she comes across as genuine. I forgot how much I loved Sean’s dad when he was a player in Emily Maynard’s season. Nicest dad ever.  He tells Catherine that if Sean chooses her he will love her like his daughter.  Sean says he can see Catherine as his wife and then welcomes Lindsay to the house.

Lindsay seems to have all of the right answers for Sean’s dad.  She seems to have more chemistry with his family and seems so much more real than Catherine. Lindsay asks Jay to have her sons hand in marriage and gets it. I think his dad prefers Lindsay for sure.  Sean’s mother loved Lindsay right off the bat too. She appreciated her kindness and openness. I think Lindsay is clearly the winner with the parents.

Sean thinks he could have a long and happy marriage with both women. I think that could be a reality unto itself, don’t you?  His mom hopes that if he’s not 100% sure than he better not propose to either woman. He is obviously going to follow his instincts and by the end his mom is crying. She thinks it’s too huge of a decision to make for a television show.

Lindsay believes that she and Sean have the qualities required for a good marriage. She gets the first last date with Sean and it’s clear that she is or at least thinks that she is head over hills. She tells him that she loves him and there’s no doubt she means it. I feel bad because I think she’s going to end up crushed by him in the end. Lindsay believes that a few months as a Bachelor contestant has turned her into the woman she has always wanted to be. She and Sean end their date by launching paper lanterns over the skies of Thailand. Lindsay is so excited to be so close to her dreams.

Apparently Catherine loves elephants. I learned this unimportant fact when she got so excited upon realizing that she and Sean were going to ride one. The couple takes a ride on a mountainside and gets a 360 view. It’s one of the most memorable days of Catherine’s life and she tells Sean that she feels like she finally fits in and belongs with him. I think if we could mix Lindsay’s sincerity with Catherine’s adultness then maybe that would make the perfect woman for Sean.

Even when Catherine is trying to be emotional with Sean she comes across so controlled that it seems insincere. It obviously takes a lot for her to let anyone in and she manages to tell him that she loves him but he says nothing. Catherine follows him crying because it hurts her to think that he won’t pick her. She calls it one of the worst goodbyes ever.

The day has come for Sean to pick his future wife and all three of them are a mess. Catherine is thinking that she put her heart out there for nothing and Lindsay isn’t even thinking that she could go home alone. Sean is crying because he has to break up with someone for no real reason. Good point, in any other situation he’d cling to her. Lindsay calmly walks up the path to Sean believing that she’s getting engaged.

Lindsay stands with Sean and listens to him totally thinking that in the end a proposal is coming.  But it’s not. His heart is with Catherine . He tells her he was confused up until yesterday and then he knew he needed to say goodbye to Lindsay. She keeps shaking her head and telling him it’s ok.  She asks if it was her, if she was the problem and then loses it.  She manages to tell him that she’s happy he found love but she needs to figure out her life without him. Sean is crying as much as she is and if he is this upset I’m not sure that he made the right choice.

Best moment of the whole thing was when Lindsay took off her heels. He was unworthy of her feeling the shoe pain.

Catherine sends Sean a note professing her love ahead of her arrival. Catherine is an emotional wreck and I think maybe she’s not the ice queen that I once thought. Sean tells her that he misses her when she leaves and he doesn’t want to miss her any more. He drops to one knee and proposes. Of course Catherine says yes and they exit on an elephant, of course.