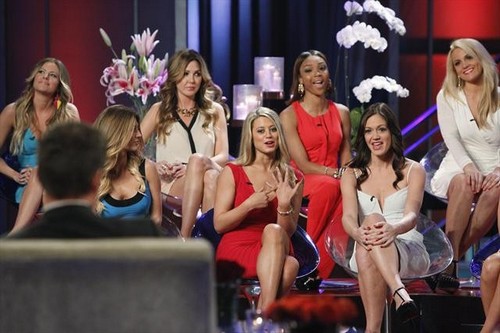 THE BACHELOR Sean Lowe returns to ABC tonight with a whole new episode.  On tonight’s show “The Women Tell All” is here and you know there is going to be a lot of back biting, cat fights and claws out.  Did you watch last week’s episode when the final 2 were revealed? We did and we recapped it for you HERE.

On last week’s show romantic adventures awaited Sean and the final three women – AshLee, Catherine and Lindsay – as they traveled to spectacular Si Kao, Thailand. From an authentic Thai market with unusual foods to a secluded beach surrounded by a rain forest to a sexy afternoon boat ride on Thailand’s sparkling waters, the dates were filled with passion and excitement as Sean continued to explore what his future would be like with each of the potential mates.  At the end of the evening

Chris Harrison spoke this week about tonight’s episode and had this to say about Tierra and whether his view of her changed after, “The Women Tell All,” episode. “No, not really.  I was hoping it would.  But that’s to say I don’t, I don’t hate Tierra.  I don’t think she’s a bad person.  I don’t think she’s you know the devil.   I think she is young maybe misguided in certain ways.  I was hoping you know ala (Courtney) or Michelle Money that she would kind of maybe see some of the errors of her ways and usually people do that when they watch the show back they learn something about themselves.  And I don’t think she necessarily learned that lesson. I was a little bit surprised and maybe a little disappointed that she didn’t come back a little more contrite. “

Chris Harrison and Sean set out to crash a few “Bachelor” viewing parties.  Sean is greeted with screams.  The house is full of young viewers and Sean loves it.  The next house the guys show up to is a sorority house at UCLA.  Sean really surprises the girls and he is pleasantly surprised himself to find out just how many people watch his show.  He is such a good sport he obliges the girls by taking off his shirt.  What a dream celebrity meeting for these fans.

The girls are talking about Ashley P. and Amanda.  These were some memorable characters.  The main attraction is Tierra.  All the girls are claiming that everything Tierra did was fake; from the fall down the stairs to the oxygen tube up her nose.  The girls are all ripping into her because she is not there to defend herself, until Chris tells them that Tierra is actually back stage.

Tierra is finally getting her chance to speak.  All of the other ladies are giving her death stares, rolling their eyes and shaking their heads.  Chris asks Tierra if she thought she would be the girl that everyone loves to hate.  Of course Tierra says that she lights up a room but when girls automatically judge her then she never gets a chance to shine.  Chris asks her if she’s nervous and she says yes.  She never imagined that she would be in the hot seat and yet here she is.  Chris then asks her if the girls were justified in how they treated her.  She said they all believed she did not want to be their friends and she said she did not want to be friends.  She was not there to be friends.  The audience laughs at most of her answers.  Chris wants to know if she has ever been treated like that and she says no.  His next question is if she has anything she wants to apologize for to which Tierra says no.  She says she never bad mouthed any of the girls to Sean and if she said anything bad to any of the ladies on the stage then they need to bring it her attention with an example so that she knows what she did wrong.  The other ladies are in shock.

Now it’s the ladies turn to comment. Leslie tells her to quit pretending to be sweet and innocent because she is delusional.  Selma tells her that she was on her side until the morning she told her good morning and Tierra just ignored her.  At this point all the other girls use this time to throw in their comments so it’s hard to tell who is saying what.

Finally Tierra and AshLee are having words with each other.  AshLee is doing her best to intimidate Tierra and all Tierra can do is say that everything that comes out of her mouth is wrong to these girls.  After everyone complaining and telling Tierra to be real and own her attitude Chris decides it’s time to move on.  He then asks Tierra about the blinding diamonds on her ring finger.  She admits that she is engaged and that it is not a hoax.  When she left St. Croix she and her ex rekindled their relationship and realized that they really loved and missed each other.  Tierra admitted that she got engage in January and she is very happy with the good man she has.

Next to take center stage is Sarah.  As they replay their time in Canada she admits how much she fell in love with Sean.  While they were in Canada Sean pulls Sarah out of the hotel room and tells her that he cares for her too much to make her sit through another rose ceremony when there is really no chemistry there.  She is obviously heartbroken again.  After an awkward silence from the audience Sarah admits that it is hard to watch that scene unfold again.  She thought that Sean was the one.  At the end of the scene Sarah says that “It’s always the same.”  Chris asks her what she meant.  She says her whole life she’s been strung along by guys and that it hurts to be told that she’s great, but she’s not the right girl for them.  She doesn’t want to say that it’s because she only has one arm, but it seems to be true.

Time for Desiree to take the hot seat.  Chris tells her that she is a fan favorite and they start to replay all of her past scenes with Sean.  Then the train wreck with her brother happens.  They replay the horrible conversation between Sean and her brother that ended her time on the Bachelor.  When the replay is over Des’ eyes begin to water.  She feels like she was really falling in love with Sean and she could see their lives lining up.  Chris asks her about her brother.  She says that she loves her brother, but he is skeptical of her experience and at the same time he did feel bad about the way things played out.  All she hopes for is to find love and Chris wishes her the best.

It’s now AshLee’s turn to tell her story.  Her departure from the show was very dramatic.  She left in anger and it was great.  AshLee believed that she would be marrying Sean.  She says that Sean told her she would be best friends with his sister and she would meet his family and they would be together.  Chris asks her if she was still in love with Sean and she says no.  She says Sean was a southern gentleman with her but as she watched the episodes play out she saw that he acted like a frat boy with the other girls.

Sean is finally in the hot seat.  He says he has nothing but fond memories with all of the ladies, but he says judging by the stares the feeling isn’t mutual.  Chris tells AshLee that she could have the floor to speak.  She asks him what happened.  He tells her that from day one she was the front runner, but he was also looking for his best friend.  He wants laughter in his home, and with her there was hardly ever laughter.  She wants to know why he didn’t pull her aside and tell her before the rose ceremony that she wasn’t the one.  He tells her that they needed the time together.  AshLee has question after question for him clearly not being able to accept that she was not in the final two.  Then she drops a bombshell.  She asks Sean why he said he had not feelings for the other two girls.  He says he never and would never say that.  She continues to ask him and goad him into admitting that he said it, but he promises that he did not say that.  She says she wouldn’t make that up and that she wishes him nothing but the best, but he did say that.  Sean then says he wants to go on the record that he does not agree with what she is saying.  They are going to commercial and you can still hear AshLee asking him about saying that.

When they come back from commercial AshLee is still trying to get Sean to admit that he did say he did not have feelings for the other two girls.  Finally Sean says he never said that but he obviously said something that mislead her and for that he was sorry.

They are showing various bloopers but nothing too exciting.

At the end of the show we get to revisit Catherine’s scenes and Lindsay’s scenes.