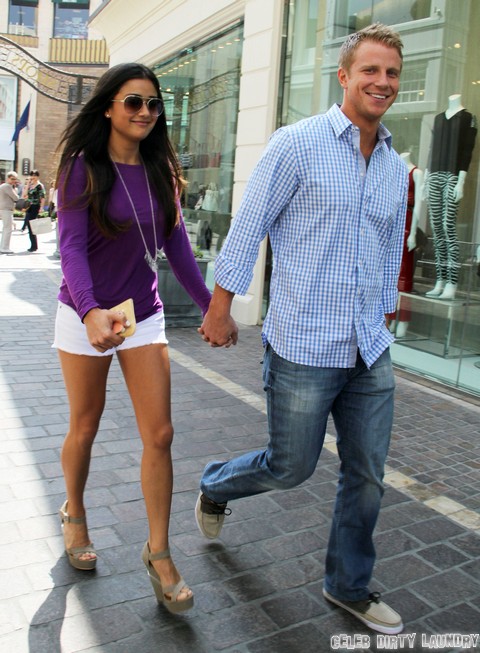 I guess Sean Lowe really needed to be the center of attention and that’s what really prompted him to do The Bachelor. He decided that his 15 minutes of fame could be extended and decided to embark on a stint over at Dancing With the Stars, but that isn’t going as well. Behind the scenes Sean is rumored to be extremely difficult and so demanding that they’ve nicknamed him Princess Sean.

One person extra irritated by Sean’s recent behavior is new fiance, Catherine Giudice. It’s bad enough that Sean has insisted on a sex ban in their relationship until after they get married, but then he opted to pass on all of those G-rated couch cuddles in favor of getting super close to Petra Murgatroyd on the show. Now to hear that her new man is acting like a bigger diva then she isn’t sitting well at all.

Catherine is beginning to realize that Sean may not be the right guy, or even man enough for her after all. The two are really butting heads over his behavior. Before that they were clashing because Catherine didn’t want Sean with Petra. Then there’s the whole topic of kids. To put it bluntly, Sean wants a house full and that plan is just not on Catherine’s agenda at all right now. They are clearly mismatched and Sean’s family would be the first to say so. His mom firmly believed that Sean shouldn’t propose to anyone and as the days go by it looks more and more like he felt Catherine was the best of that batch, but not necessarily his wife to be.

Do you think that Sean and Catherine’s days are numbered? Do you think his head is a bit inflated and he believes that a show like DWTS actually needs him?  Tell us your thoughts in the comments below!