Sean Lowe and Catherine Giudici Break Up – Marriage Off 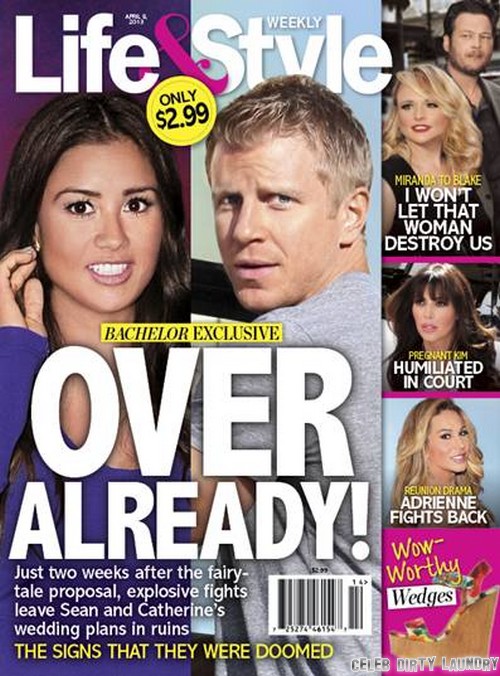 Are The Bachelor star Sean Lowe and his fiance Catherine Guidici fighting again? According to the latest issue of Life & Style magazine, they are! Who knew that reality TV romances wouldn’t work out for the best?!?

Sean and Catherine announced their engagement on the season finale of The Bachelor and now it appears that things between them are on the rocks. After his first performance on this season of Dancing With The Stars, the duo hit up The Sayers Club in Los Angeles to celebrate. Apparently Catherine was miffed at him and they were fighting.

A source said, “About an hour after they arrived, Sean and Catherine were in a corner, and she was clearly mad at him, yelling at him. Sean was trying to talk to her, but she didn’t want to hear it. She was fed up with him and rolled her eyes. Then she started crying, wiping her eyes and looking away from him.”

The fellow partier said that the argument lasted a rough thirty minutes, adding, “She was shaking her head and hands at him.”

Prior to that, a snitch said that there was trouble between the couple at the afterparty for DWTS at Planet Dailies. The spy said, “They sat side by side at a table at the back of the restaurant with some friends, but they hardly talked. Catherine was texting on her iPhone while Sean was drinking beer and toasting with his buddies that he had flown in from Dallas. He was being very goofy, very frat boyish, and Catherine looked like she didn’t want to be there.”

Even worse, two nights after that, they were arguing yet AGAIN! A source said, “I could hear Catherine talking to Sean, and she sounded annoyed. They were having a disagreement about something. I heard Catherine say, ‘That is annoying, Sean. Why do you say that?’ Sean was trying to calm her down.”

Are they going to call off the wedding now? What do you think?