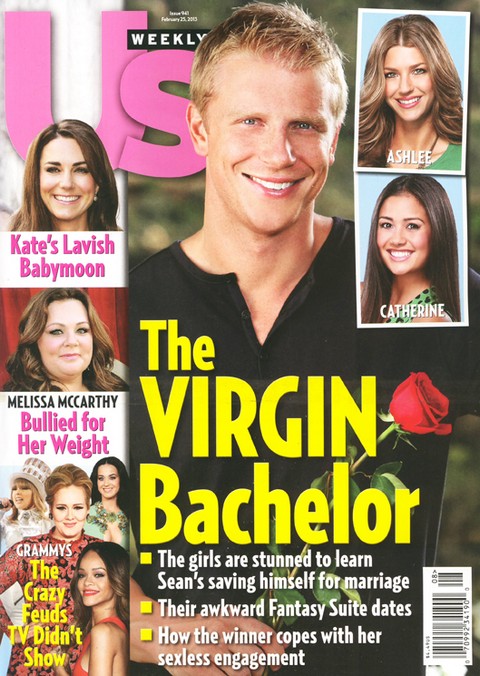 Sean Lowe may be the first openly-virgin bachelor in the history of The Bachelor. I’m not one to judge other people’s moral values (unless others value killing or something, which is totally not okay) but Sean claims to be re-virginized, which is just plain freaky. What the heck does that even mean? Glad you asked! Sean was all about sex in college—he was thrilled to live a life of whoredom and earthly sins, until he “embraced religion” and became a “born-again virgin.” I’m no linguist or bible scholar, but I think he basically considers himself washed of his sins of the flesh, and has a second chance at . . . whatever being a virgin does for him. Does this mean viewers shouldn’t expect sexy hookups during the overnight dates? Probably. No word yet on how series winner feels about this, but we’re guessing she isn’t thrilled with the arrangement! Will Sean break his virgin promise for his new love? Click here to read our series spoilers!

We reported that Taylor Swift was being super high maintenance at The Grammys, refusing to even walk past Carrie Underwood (or applaud her performance!) for hate of her. But the real drama was between Katy Perry and ex-bestie Rihanna, who refused to be seated near each other during the awards ceremony! What’s got their panties twisted? Like the rest of the world, Katy thinks Chris Brown is bad news and wants him out of Rihanna’s life!

Whether cheating rumors are true or not, Mila Kunis has moved in with Ashton Kutcher, and is the perfect roommate! The girl is down to earth, and even deigned to eat at Red Lobster with his family in Iowa. The girl is a keeper—she threw him a surprised party, inviting his pals for a day of go-kart racing! Could she be the next Mrs. Kutcher?

Kate Middleton and Prince William are over the moon about their upcoming baby, but that doesn’t mean they’re in full baby mode yet! The royal couple are spending as much time as possible together before the big day, and are even planning a lavish babymoon (pre-baby honeymoon, for those of you not in the know). Will the Queen approve of the royal spending, or tell Kate to budget the vacation?

Melissa McCarthy is largely considered one of the funniest actresses in Hollywood, but that doesn’t mean all her feedback is positive. The actress is struggling with weight-related bullying and criticism, and it begs the question: when discussing her acting, is her weight taboo, or just a part of who she is?

Pick up the Febraury 25, 2013 issue of Us Weekly for the full stories!