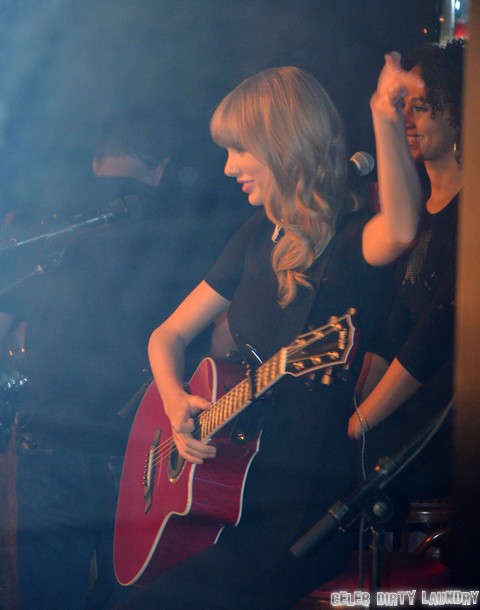 Like it or not, Taylor Swift is a major diva. The multi-platinum kind-of-country music star  has changed a lot since we first heard Our Song on the radio. She’s turned from Nashville cutie to conniving, manipulative spoiled brat, with an agenda and tendency to self-victimize. Can you tell we’re disgusted with her antics? Considering her history with men and major change in song style, it isn’t at all hard to believe that the drama queen has ordered Carrie Underwood out of her sight! Don’t worry about Carrie’s feelings though—she admitted that they’re “not close at all,” which is Hollywood lingo for hatred! Everyone in show business acts like it’s a big family, so when two stars aren’t close, you know shit’s gone down!

“Grammy execs were ordered to keep the two ‘from crossing paths’ at the February 10 show ‘since they hate each other,’” an insider told Us Weekly, print edition February 18, 2013. The two have been chummy in the past—who’s surprised? They’re both blonde country music stars, and both love coming off as the innocent sweetheart type. Well, news flash: it never lasts! Remember when Jessica Simpson was America’s good girl, and now she’s popping out kids all over the place, engaged to a guy who cheated on his ex wife, and slumming around grumpily. The higher they rise, the harder they fall!

The friend explained that “Taylor feels Carrie is always rude to her, so she steers clear of her.” Well that’s not so dramatic, is it? I think we all have people like that—in school, at work . . . there’s even a few cashiers I avoid at the grocery store for their bizarre check out banter! But Taylor’s gone from avoiding Carrie to ordering lackeys to choreograph opposing schedules! The Grammy awards are stressful enough without having an intern chaperoning Taylor and Carrie backstage. Do you think that Taylor is avoiding Carrie? Is there more to the fight than Carrie being rude? I wouldn’t put it past her . . . the blonde smiley girls are always the meanest!