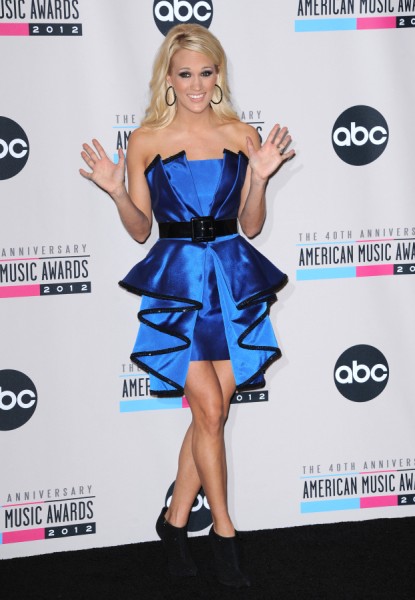 It has become very popular to bash on Taylor Swift lately. Carrie Underwood and Brad Paisley did it at the 2012 CMA Awards and Tina Fey couldn’t help herself at the Golden Globes and now Carrie Underwood is at it again. In all fairness Carrie doesn’t necessarily hate on Taylor in her new Allure interview. She just makes it very clear that there is no love lost between the two young country stars.

When asked about the love-challenged singer Carrie replied, “I’m not close to her. We run into each other at events. We’re never in the same place at the same time.”

Now I know what you’re thinking. What feud? That’s not anything! Oh really? You don’t think that response was just a little curt and dismissive? She could have said anything. She could have said, “Taylor’s a super cool girl it’s just unfortunate our schedules keep us apart because we always talk about hanging out!” But she didn’t. She said. “I’m not close to her” which basically means “I can’ t stand the attention-hungry biotch!”

And it’s no big mystery why. Carrie was the shining star in country music before Taylor came along with her infectious lyrics and quasi pop songs. You can sense a chip on Carrie’s shoulder, no? Carrie’s music is unmistakably country. She hosts the CMAs. She had a stable husband in hockey player Mike Fisher. She’s everything Taylor is not. I’m sorry but there’s nothing country in Taylor’s songs. Her break ups garner more attention than her talent and I’m not sure if she’s accepted into the country music community as much as she would like. Taylor’s the outsider yet her popularity is out of control. In her mind, Carrie does everything right, yet Taylor still gets all the attention and wins all the awards. Some might think Carrie would appreciate being more accepted in the country community but, come on. She’s young. I don’t care what she ever says. She’d love to have more of Taylor’s mainstream recognition and success. right?

Do you think there’s a Carrie Underwood/Taylor Swift feud playing out? Was the Carrie Underwood Allure interview answer inappropriate or just truthful? Carrie said a lot in that short answer. Does she think joining the Hate on Taylor bandwagon will get her attention?