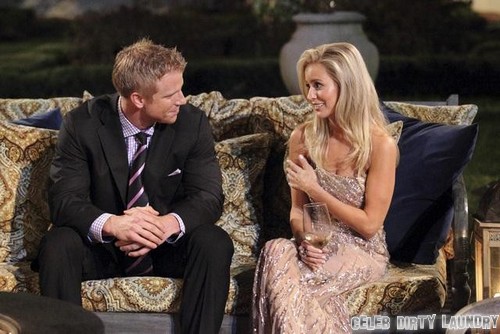 The Bachelor is nearing its close and we’ve already spilled the beans that Sean Lowe has chosen Catherine Giudici to be his betrothed. The only problem? Apparently he’s been hooking up with former star of The Bachelorette, Emily Maynard! Oh the scandal!

According to the latest issue of Star magazine, Sean and Emily recently came face-to-face with one another at a VIP event at the Bachelor mansion. Since we already know that they have a bit of a history together, we’re not really surprised that Emily re-thought her previous decision to give Sean the boot and may have decided that she wants a little Sean in her life.

They had grown close during the filming of her season of the show, but in the end, she ended up choosing Jef Holm. Still, Sean was adorable and sexy, so perhaps she just wanted to see if there was anything else there between them?

A source said of the event, “Sean looked so nervous to see her. You could see the old sparks were still there.”

It’s a shame because he had already asked for Catherine’s hand in marriage, but apparently that’s the reason Emily wanted him. She became even more interested in Sean once she learned that he was engaged to Catherine. Oh the drama…. The inside snitch said, “She texted him immediately after leaving and said she regretted not having chosen him.”

Oh snap! What do you think of the idea of Sean Lowe and Emily Maynard together? Hit the comments and let us know your thoughts!