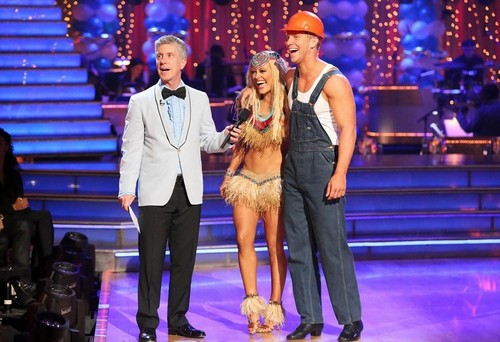 SEAN LOWE danced a VIENNESE WALTZ, on the fourth episode of Dancing with the Stars: 2013 performance show tonight. Each couple will dance to a song of the celebrities’ choosing that represents a memorable time or experience in their life. In addition, each celebrity is challenged to perform a brief solo during their performance. If you missed the show, we recapped tonight’s show for you and if you want to see how all the couples did go HERE!

Sean Lowe joked that he agreed to appear on “Dancing With The Stars” to learn the waltz for his upcoming wedding but too bad this is a wedding that won’t every happen according to the bachelor history and record.

Judges’ Comments:  Len said, “He was steaming and I am beaming.  That was a good effort in a difficult dance, you got  a bit excited and went off a bit!  Overall I thought you did a good job.”  Bruno said, “Ah that was so sweet, he had the wide eyed innocence of a young boy.  At times you have wonderful fluidity, but you stumble some time.”  Carrie Ann said, “Baby steps, you are working on.  You had 2 major lifts, so watch the lifts.  Other than that what they said!.”