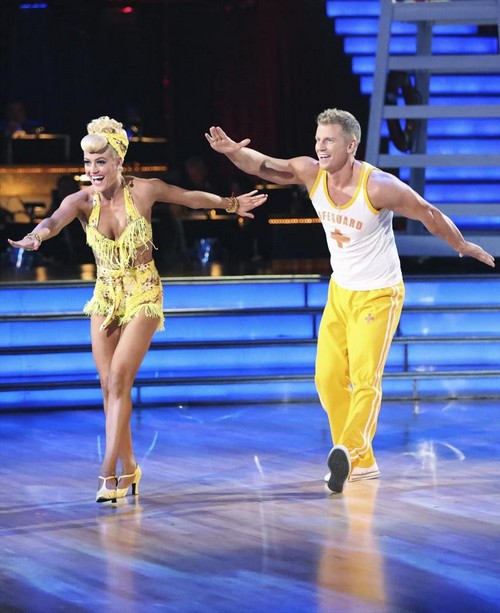 It looks like that Bachelor curse is striking faster than ever before. I’m talking about the engagement of Sean Lowe and Catherine Giudici of course and how it’s falling apart fast. These two were happy as can be less than a month ago when they admitted to the world how this match made on reality television was the best thing that ever happened to them. Ten short days later the couple was seen out in public having a huge fight and it seems that while Catherine moved to LA to be near her new man, he sure isn’t putting her first.

Their first weekend together as a couple he flew a bunch of his buddies in from Texas for a guys weekend! Then there’s the fact that he refuses to screw Catherine until they are married, but is super close and hands on with Peta Murgatroyd, his Dancing with the Stars partner. Catherine is miserable and the two are on shaky ground at best.

According to the April 8th print edition of In Touch the couple who once were anxious for a summer tv wedding have now pushed back the plan to fall or winter at the earliest. Last night after Sean danced with Peta he was asked if he would be practicing those moves at his upcoming wedding and he said, “No, I don’t think so.”

We don’t think so either, because there’s obviously not going to be a wedding in his future! At least not to Catherine!  How long do you think it’ll take before Catherine packs her bags and heads home?  I suspect she’ll be on a plane and he’ll be at the studio dancing with Peta none the wiser!  Did you think that Sean and Catherine would make it? Tell us your thoughts in the comments below!