Sean Lowe Says ‘The Bachelor’ Is A Waste of Time: He Will Never Find Love! 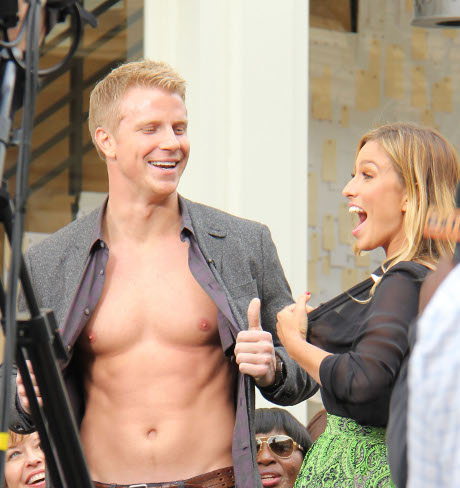 Sean Lowe may have gotten more than he bargained for when he signed on to the 17th season of The Bachelor. The latest issue of Life & Style, which is on newsstands now, is reporting that Sean feels he may be wasting his time looking for a wife on the reality show. The 29 year old told the magazine “I had some reservations going into the season. But on the other side of it, I’m glad I did it.”

The newest season of ABC’s mating show has been one of confusion and mixed emotions for Sean thus far. He previously told Life & Style “As the season progresses I get to a point where I think, Wow, I’ve got so many wonderful women, I don’t know what I’m going to do. There were certain points in the season where I couldn’t follow the rules. I had to follow my heart.”  A lot of men would love to have this problem, but what they probably don’t realize is that Sean has a lot pressure on him.  He has a short amount of time to get to know each of the 26 women. He is then he expected to pick a life partner.  Sean has to have his BS detector set on high to weed out the women who are genuinely interested in him and the ones who have ulterior motives for being on the show.  Then there is the matter of The Bachelor having yet to produce a married couple.  Sean needs to choose the winner carefully because he won’t want to be another statistic.

This week Sean had a meltdown. Per Life & Style he was frustrated because a group of the women were bad mouthing Tierra LiCausi. He tells the magazine, “There was some drama with the women as they questioned my decisions, and that made me question why they were still there.” He also confessed, after things got to be too much, “I think I might be wasting my time.”

Sean has every right to feel this way. Women are competitive and catty. The fact that one woman was ganged up on means their warning to Sean was self serving. They didn’t care about what was best for him, but rather who they wanted off the show. Also per Life & Style a show insider said “At one point, he became so convinced the women weren’t there for the right reasons, he considered quitting the show.”

Women are attracted to Sean for his cut body but they need to know he is not a dumb jock. Sean is a self proclaimed nerd. He likes to do crossword puzzles and quiz his friends about historical facts. A famewhore or a woman who is not well rounded will not make the cut. I’m sure there are some genuine women on the show who can appreciate Sean for more than his good looks.  But if you think about it most people go on reality shows to further their careers. Several Real Housewives have used the shows to promote their businesses (Bethany Frankel launched her Skinny Girl Brand) or used the show as a platform to promote their causes (Taylor Armstrong and NeNe Leaks promoted their charities that help abused women).

The show is only in week 5 so we will have to wait to see how it all plays out. Sean is a former Bachelorette contestant so he has a lot of knowledge about how this type of show works. Let’s hope he uses his experience to pick the right woman.

Pick up the latest issue of Life & Style to learn more about Sean and the latest news on The Bachelor.