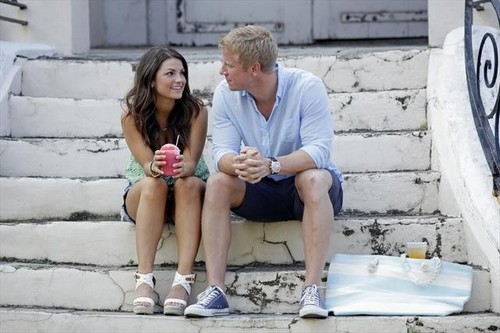 So I don’t usually watch The Bachelor.  Ok, who am I kidding.  I have never watched any of the Bachelor or Bachelorette seasons.  Up until now, it seemed like a bunch of desperate fame-seekers, but I have been sucked in and there is no way for me to escape.

Let me just start by saying that my favorite to win is Tierra LiCausi.  Can we all agree that she is bat-shiz crazy and for that alone she deserves to win? I LOVE HER!  She is the most overly-dramatic girl in the bachelor’s harem, and I’m going to say that she plays the part of damsel of distress quite well.  Those of you who are looking for gold-digger training, look no further, because Tierra is your master.

Now who is my least favorite to win out of the girls that are left over?  Well, that would most definitely be Lesley Murphy.  She seems like a nice enough girl; unfortunately, she doesn’t look like his future wife.  Maybe his future mistress, but not a wife.

Who do I think is going to win?  I want Tierra to take her trophy, but it’s starting to look more and more like itty bitty Catherine Giudici will be mounting that hunk of man  meat.

Now back to Tierra.  I get it.  She’s faking it.  She needs attention.  She is shady.  But isn’t that why this show has been on for 17 seasons?  People like the drama and Tierra is the total package.  Bachelor Sean Lowe seemed to like Tierra a lot.  That was until he walked in on her and Robyn Howard in a heated argument on a previous episode.  Things seemed to change after that.  Now, I know that we don’t get to see everything that goes on, but I’ve gotta ask, what has Tierra done to make the girls hate her so much?  I haven’t seen her go out and attack someone for no reason.  When she has approached any of the girls it was definitely warranted.  What they show for the most part are the girls bashing Tierra behind her back and Tierra being uncomfortable because she knows what they are doing.  But Tierra has got her eye on the prize.  She is there for one reason and one reason alone… to get her a husband.  These other girls are some serious bitches that seem to be causing more drama by crying to Sean about it.  He was right.  If they are going to say something, the least they could do is give examples of her behavior, specific details, anything.  Tierra not wanting to be there friend has nothing to do with her relationship with  Sean and that is what he is most worried about.

Be on the look out for next weeks live recap and keep your fingers crossed for my girl Tierra.