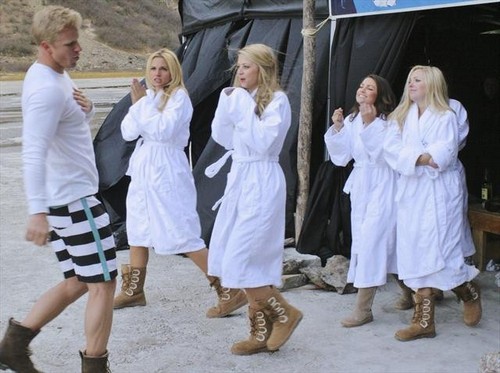 THE BACHELOR Sean Lowe returns to ABC tonight with a new episode.  Tonight is the conclusion of a two night Bachelor week.  On tonight’s show the winter wonderland of Alberta, Canada, is the backdrop for big drama and shocking eliminations, as Sean comes to a heartbreaking decision.  Did you watch last week’s episode? We did and we recapped it for you HERE.

On last night’s show – part one of a a two-night Bachelor special event began last night with Sean whisking the remaining 11 bachelorettes away to picturesque Whitefish, Montana, to explore his romantic connections. But the outspoken Tierra and sweet natured Jackie faced off in the dramatic two-on-one date, and one of them was sent home immediately. The Bachelor attempted to escalate his relationship with Lindsay to new heights when the couple took an astounding helicopter ride over the gorgeous mountains of Montana’s Glacier National Park. Eight women got to compete in a Montana relay race, including milking goats, with the winning team getting to spend more time with Sean. And one controversial bachelorette continued to cause a firestorm in the house, leaving Sean to worry if he would ever find his wife.

On tonight’s show the two-night “Bachelor” special event concludes as Sean continues his journey around the world to find love, taking the nine remaining bachelorettes to spectacular Alberta, Canada. Catherine gets the first one-on-one date in Canada, meeting Sean on a remote glacier at Jasper National Park, followed by a fairy tale dinner in a magnificent ice castle. On the group date, Sean implores the seven women to strip down to their bathing suits and take a polar bear plunge in icy cold Lake Louise, but there are a few women who cause problems. The evening ends with Sean supplying an unexpected surprise. Desiree receives a terrifying individual date when the couple needs to rappel 400 feet down a cliff in Banff National Park. Nerves are at an all-time high, and Sean’s feelings are growing for all of the women, but six will remain at the end of the night

Back in the Canadian Rockies, the girls are still vying for Sean’s attention and still complaining about Tierra.  The date card comes in for the one on one.  Today’s date will be with Catherine.

Catherine is standing in the middle of what looks like a blizzard and a huge snow bus appears with Sean driving.  The plan for the day is to play in a glacier and he’s brought along a red snow suit for Catherine to fit into.  Sledding is the first activity and they are having so much fun.

The second part of the date includes a horse drawn carriage.  They are taken to an ice castle.  Yes, it is an actual castle carved out of ice.  The whole setup is very romantic with a loveseat and small fire.

Back at the house the girls find out who is going on the group date.  The girls that will be going are Tierra, Selma, Sarah, Lindsay, Ashlee, Leslie, and Daniela.  Daniela is crushed that she hasn’t had any time alone with Sean.

At the castle, Catherine tells Sean about a traumatic experience she had at 12.  Her best friend was walking on a narrow trail in front of her when a tree falls on her friend and kills her instantly.  She knows that things can be taken away from you in an instant so she really wants a family to cherish.

On the group date Lesley and Sean get a canoe while the other girls get separate canoes.  They will now attempt the Lake Louis Polar Bear Club.  It is freezing out there, clearly.  Sean tells the girls that they don’t have to do it but reassures them by introducing them to a lifeguard and EMT.  Selma refuses to participate or as she puts it, put her life at risk.  Tierra is apprehensive, but anything for her man.

The girls are preparing to take the plunge and they are incredibly nervous.  They jump in and they are so proud of themselves even though they are in a little bit of pain.  All of a sudden the girls realize that Tierra cannot breathe.  The paramedics rush in and try to warm her up.  Her lips look a little blue and it’s the Tierra show once again.  Sean is worried, but admits there isn’t anything he can do but allow the professionals to do their job.

There is only so much the paramedics can do so they rush Tierra into a waiting SUV to try to warm her up.  The paramedic asks her what her name is and she doesn’t know it.  Desiree and Catherine go check on her and we find out Tierra has a bit of hypothermia.  The other girls come back and they are in a great mood.  Of course some of them start trash talking Tierra.

Sean goes to the room to see Tierra and she is hooked up to an oxygen tank.  He feels bad for her, but admits that she keeps finding ways to spend extra time with him.  He is more than okay with her staying in the room to rest and is comfortable with his feelings for her.

The girls are getting ready for the evening and they are ecstatic that Tierra will not be there.  No drama, they say.  They all believe that they will now have more time with Sean.

At the lodge, Catherine and Desiree get a note.  The one on one date will go to Desiree.

While the other girls on the group date are trash talking Tierra, guess who walks in the door.  She sits for a second and Sean walks straight to her.  He takes her by the hand and has some private time with her.  The girls are pissed.

FYI: Our recapper had an emergency and had to leave suddenly.   So to continue with the recap visit our friend.