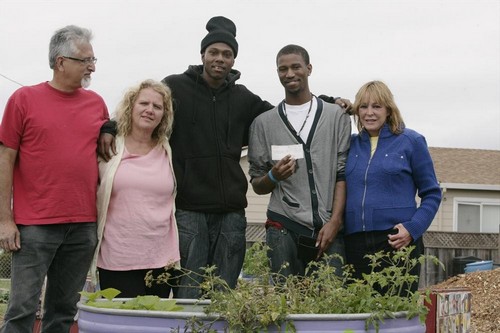 SECRET MILLIONAIRE returns to ABC tonight with a whole new episode called, “Debbie Johnston – Richmond, CA.”  On tonight’s show business owner Debbie Johnston travels to Richmond, CA sharing hope and contributions with a community in need.  Did you watch last week’s episode with marketing guru Jay Deutsch?  If you missed it we have a full and detailed recap here for you.

On last week’s show Marketing guru and self-made millionaire Jay Deutsch – Chief Executive Officer and Co-Founder of BDA – left his life in the Pacific Northwest to travel to Phoenix, Arizona in search of people and organizations in need. Deutsch was participating in “Secret Millionaire” in honor of Susan Brockert, a friend and longtime BDA employee who was murdered by her boyfriend during a company retreat.

On tonight’s show it’s the tale of two Richmonds as healthcare industry self-made millionaire Debbie Johnston leaves her home in Richmond, Virginia for the impoverished and crime-stricken streets of Richmond, California with a mission to find deserving people and organizations in need.

During her week-long visit, Debbie meets a number of grass-roots organizations that touch and move her in amazing ways, including: Reach Fellowship International, a community center that provides job training, employment and medical education and services; NIAD Art Center, a studio art program and gallery assisting adults with developmental and physical disabilities; and Self-Sustaining Communities, an organization working with low-income residents and community members to create wide-scale, environmentally sustainable local food production. After a week of getting to know the amazing people behind these organizations, Debbie shares the surprise of a lifetime with them.

Tonight’s episode 2 looks like it going to be great and you won’t want to miss it. So be sure to tune in for our live coverage of ABC’s Secret Millionaire episode 3 — tonight at 8PM EST!

Debbie Johnston is a millionaire. She’s from Richmond ,Virginia and frankly the only thought she had about California is how much she enjoyed the spa there and yet she’ll be going to Richmond California, one of the poorest cities in the state. She’ll be volunteering and living off on her allowed money. Which in her case is 32 dollars for her six days there. She’s doing all of this to better understand what people are going through now.

Debbie wasn’t born rich but her early hardships weren’t similar to what many now face. Going through her new neighborhood she was surprised to find the streets nearly deserted. The are several houses boarded up and she surprised to find her own accommodation slightly boarded. Bars on the windows are also new. The place is clean and does offer her a reasonable amount of space but this is the worst place she’s ever lived.

Here’s a woman with an extended walk-in closet and an assistant named Dan who did all of her packing. How is she going to cope in this neighborhood?
On her third Debbie is nearly broke. She only has 5 dollars left. If she was smart the rest of her money was spent at a supermarket. However it more probable that she’s been ordering food for the last two days. The change in her diet hasn’t agreed with her and she appears to be a little bit paler.

Earlier she got to see a volunteer center that helps provide healthcare and substance to people in her neighborhood. Debbie was able to see first-hand how so many are struggling without healthcare. She was also able to see that despite the numerous bullet holes in the building, the volunteers preserved. Debbie was broken simply looking at her house but these people have had to be stronger.

Another center to catch her eye is the one created to help disabled children. Her own sister has MS. Something even she admits she let fall to the wayside. Seeing these kids has remind her how hard it is for them and how easy as well to help them.
Their teachers have them channeling their frustrations into art without the students ever having to believing they weren’t worthy.

Although the one things that has truly removed the blinders for her is when she meets a group of young men. They created self-sustainable garden as well as memorabilia towards all of the people tha have passed away this year. This year alone and the place already have several trees dedicated to loved ones. On young man had only recently lost a friend to the rampant gun violence.

He himself was shot twice for entering a church outside of his neighborhood. The church part is what constantly gets her. For that amount of violence to happen there is inconceivable to her.

It’s coming to the end of Debbie’s stay in Richmond California and it’s time to reveal her secret millionaire status. The first place she chose is the art center that helped the disabled. In honor of her sister she donated 30, 000 dollars. Admittedly that is not much but she hasn’t finished donating. The center was able to make much needed repairs and buy extra art supplies.

Her next stop is the community garden. She was able to donate 50,000 to the garden and 10,000 to the two boys that told her their life story. As she says they’re her boys now.

Her last stop was to the Women’s Center. It was them that first their arms to her and she returned that in kind. The center receives her largest donation to date. They were given 70, 000. With that money the Center is considering expansion by buying the building next door.

Did Debbie learn something with this experience? Yes. In all Debbie donated 160,000 and hopefully she will continue with helping communities such as Richmond.