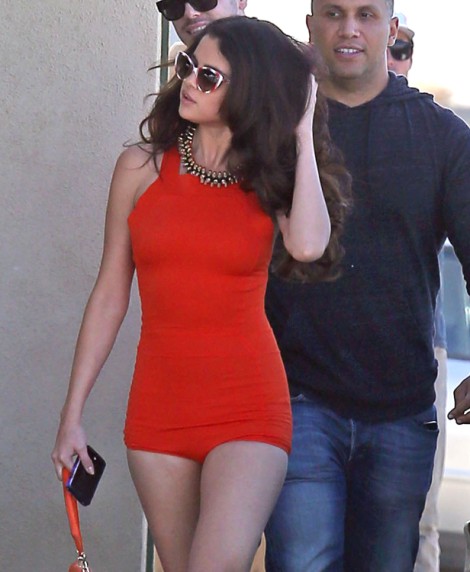 Now this is more like it. Yesterday I reported the tabloids are all over a story involving a Justin Bieber/Selena Gomez reunion. Justin’s people are willing it to happen because they think Selena’s angelic face and perky boobs will help calm him down during this latest breakdown. In my infinite wisdom I advised against it because Selena’s doing gangbusters if not better than ever since she dumped him. HOWEVER, she’s throwing all her eggs in the upcoming Spring Breakers basket. She and her co-stars have been promoting it hard and her post-Disney career is depending it. It’s her version of Kristen Stewart’s Snow White and the Huntsman (without all the mini coopers). Studios are anxious to see if people accept Selena in a grown up role and as something other than Justin Bieber’s girl on the side.

But what if they don’t? I’m not interested the movie at all and though my age my not be the target demographic, let me assure you, my maturity level is. Would Selena get back together with Justin Bieber if Spring Breakers tanked? HollywoodLife seems to think so. A source told the website that if Selena can’t hack it as a solo artist she’ll consider being a part of a major celebrity couple again. Please keep in mind this is from HL so there probably was no source and Selena probably is not remotely considering this notion. HOWEVER, it makes sense. You have to stay in the spotlight any way you can. If people don’t want to see you in movies will you just take the fact that they want to see you on someone’s arm? It worked for Phoebe Cates, Robin Wright Penn and  Diane Lane (although the last two have since divorced and are acting more now). I can actually see Selena as a young Phoebe Cates. They both have those adorable cheeks!

So… perhaps I wouldn’t respect Selena’s decision but I would understand it. You have to take respect and integrity out of the whole situation. This is Hollywood after all. Justin Bieber might be a douche but he’s better than obscurity, right?