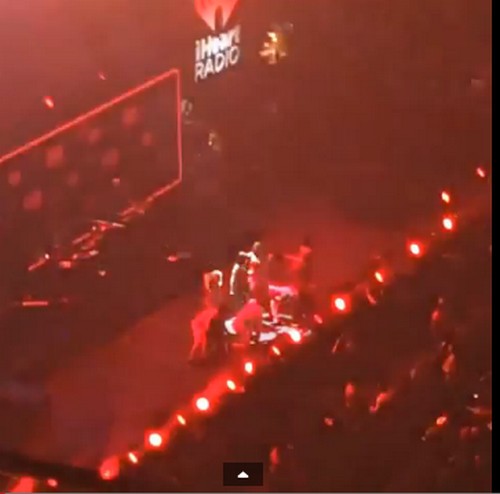 Apparently Selena Gomez isn’t the girl you would want to bring home. As if sleeping with Justin Bieber after he repeatedly cheated on her didn’t taint her image enough, Selena threw a diva fit a the KIIS FM’s 2013 Jingle Ball. She was all set to perform when she experienced both audio and mic malfunction. It was unfortunate although the singer made the situation worse by simply dropping F bombs and walking off the stage. She could have, and this is just a guess, actually sing live.  You know take it back to the acoustics.  She did do it but reluctantly!

There was no need to worry about getting heard without a mike. When the former child star dropped her “What The Fuck” bomb then odds are the audience was stunned into silence. Plus she tried to speak to them through the technical difficulties. Us Weekly reports Selena tried to joke her way out of the fiasco before finally giving up and was cursing as she left the stage.

But it didn’t get any better. Clearly agitated, Gomez continued to speak to the crowd hoping the issue would quickly be resolved. “I have to thank you guys so much for allowing me to be able to perform the music that I love,” Gomez said. “And I have to say that before you guys go on to the people that you care about, I really appreciate you supporting everything that I do. So this next song is the first song I had hit No. 1, and it’s called ‘Come & Get It.’

Moments after finishing her one song she left the stage and was overheard saying “What the fuck!”  Several people in the audience noticed how angry and upset she was to do the singing thing without “backup.” So much so that she ditched professionalism and never finished her set. Why couldn’t she continue to sing on her own. Wasn’t she good enough?

Haven’t heard anything on her actual singing. All that’s known is that she didn’t like doing it. She knew she would have to face lip-syncing questions the next day and still she walked off that stage.

You know I think a lot people can now see why she was hooked up with Justin Bieber for so long. Like finds like all the time!