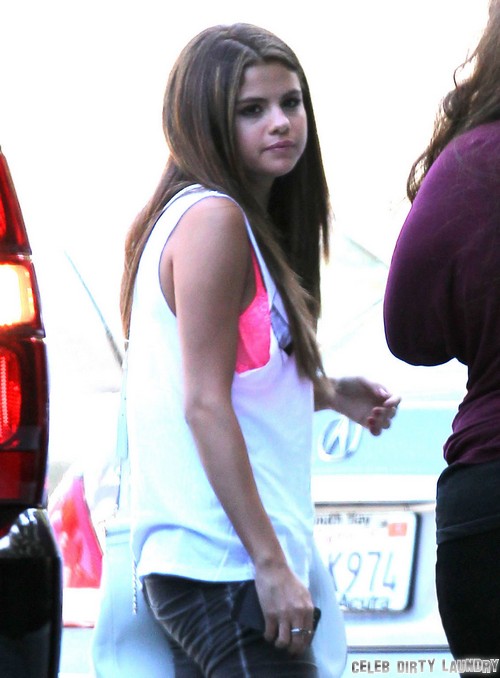 Who knows what’s really happening with Selena Gomez and Justin Bieber? One minute they’re together, and the next minute they’re not. Last we heard, they had reunited in Norway and Justin was uploading images of them all loved up and cuddly. However, they soon went their separate ways, and now Selena claims that she’s single.

Not only that, but she also claims that Justin’s constant parade of model flings and exes don’t bother her. She was recently interviewed on the TJ Show promoting her new single, and when asked whether she cyber stalks Justin’s model flings and other ex-girlfriends, she replied, “No, I think that would be torturous to myself. That’s so not worth my energy.”

That’s not all – a source tells Hollywood Life that the reason Selena is calling herself single despite hooking up with Justin a mere few weeks back is because, “Selena felt like a booty call after she came back, and then Justin went back to his old games by ignoring her calls, etc. She did that interview to remind him that she’s a precious princess and he needs to respect her. Is she trying to make him jealous? Hell yeah. She needs to feel wanted or she will cool things off again. If they didn’t have the history they do, she would not be putting up with all of this.”

Umm, this ‘source’ seems to have it all backward. From everything we’ve been hearing over the past couple of months, she’s the one that dumped him, that’s been giving him mixed singles, and the one that’s calling the shots on the relationship. This just seems like a desperate attempt from Selena’s camp to try to spin this into garnering sympathy or pity for Selena, but it’s not working. In fact, her attempt to continually use Justin’s name to gain publicity for her new single is so embarrassingly see-through that it’s actually becoming a little pathetic.

Selena Gomez heading to Sony Studios with her pink bra showing under her tank top in Burbank, California on May 13, 2013.