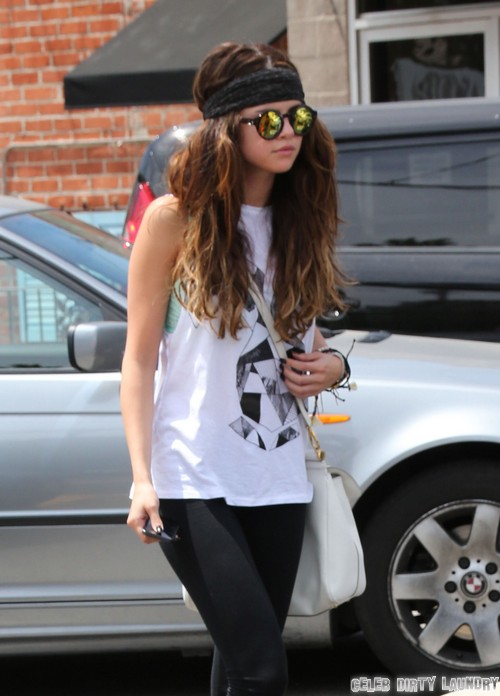 For those who are about to suggest that neither Miley or Selena knew about this clash – please, they knew. Release dates of singles and albums, promotional duties, etc. get looked over hundreds of times by agents, managers, producers, and record & studio executives. There’s simply no way that Selena wouldn’t have known that Miley was releasing her single the day before her, just like there’s no way that Miley wouldn’t have known about Selena’s single releasing the day after hers.

So what, you ask? What’s the big deal? Well, when there are two singles released from two major stars a day apart, the publicity for one will eat into publicity for the other. Instead of fully focusing on Miley’s ‘We Can’t Stop’, the airwaves are already getting another new song by Selena Gomez, ‘Slow Down’. Brands that might have partnered with Miley or radio stations that would have interviewed her now have to choose between her or Selena, or try to squeeze them both into the schedule.

So why schedule it like this in the first place? Well, there were reports a while back about Selena not liking Miley and being ‘jealous’ of her relationship with her on-again/off-again boyfriend Justin Bieber. That seemed very unlikely, considering that Bieber is as far away from Miley’s type as you can possibly get. However, this isn’t the first time there have been rumors about Selena Gomez and her whole young Hollywood crowd [including her BFF Taylor Swift] not liking Miley in the past few years. And the feeling’s probably mutual. Selena and Taylor apparently think that Miley’s image is too trashy, and Miley thinks that they’re hypocrites, preaching one thing and doing another. Don’t forget, they all used to be friends. But it’s Hollywood, and this sort of thing is bound to happen, especially for young stars who are in the media as often as these three are.

Now, I don’t know if any of you will remember, because this happened a while back – but Miley and Taylor were involved in somewhat of a Twitter ‘feud’ when Miley re-tweeted a picture that basically called Taylor a slut for sleeping with so many guys, although she was mostly defending her own wild-child image with that tweet.

In the end, they may have used to be friends, but I think there’s a wide enough rift between all of them now that it doesn’t matter anymore.