Selena Gomez Wants Miley Cyrus To Stay The Hell Away From Justin Bieber! 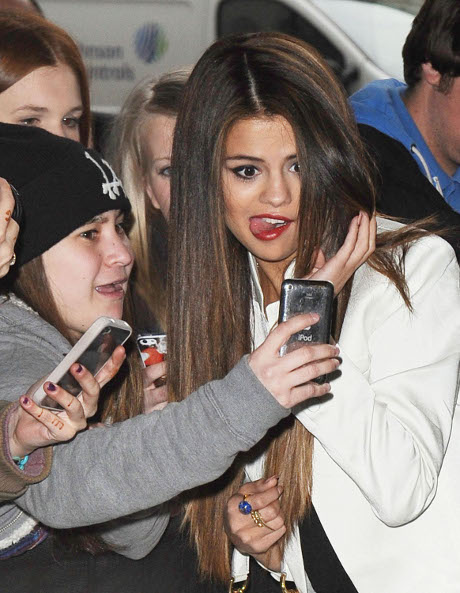 You know what’s interesting? Selena Gomez is friends with all a lot of former Disney stars and hangs out with most of the Young Hollywood crowd – excluding Miley Cyrus. I had never really noticed that until now, so it’s not completely ridiculous to think that Selena might be jealous of Miley getting close to her on-again/off-again boyfriend, Justin Bieber.

According to a new report from Life & Style, Selena Gomez has told Justin Bieber to stay away from Miley Cyrus. The magazine’s source says that Selena is still jealous of Miley because Justin and Miley supposedly hooked up several years ago, before Selena and Justin started dating. The source adds, “Selena doesn’t want Justin anywhere near Miley — and they’ve been fighting about it.”

Um, I highly doubt that Justin hooked up with anybody ‘several years ago’. He’s barely out of puberty, was he supposed to be hooking up with Miley when he was 13? I mean, I don’t want to be mean about it, but I always thought that he lost his virginity to Selena. I guess I could be wrong, but it kind of explains his insane level of attachment to her, even while she’s continually dissing him and humiliating him in public.

Even now, Selena’s rep addressed this story and said, “Selena is a little too busy with her own life to even give this any attention. She doesn’t care who Justin spends his time with.” Ouch. Poor Biebz. I don’t really like the kid, but this girl is putting him through the ringer, isn’t she?

Either way, I don’t doubt that Selena is the jealous type, but I somehow can’t see her getting jealous over Miley Cyrus. Selena and Miley don’t seem to be friends, and maybe there’s some animosity and left-over resentment, but Justin’s not exactly Miley’s type, is he? I mean, going from Liam Hemsworth to Justin Bieber is not only laughably hilarious, but extremely unlikely. What do you think about this convoluted Selena Gomez/Justin Bieber relationship?