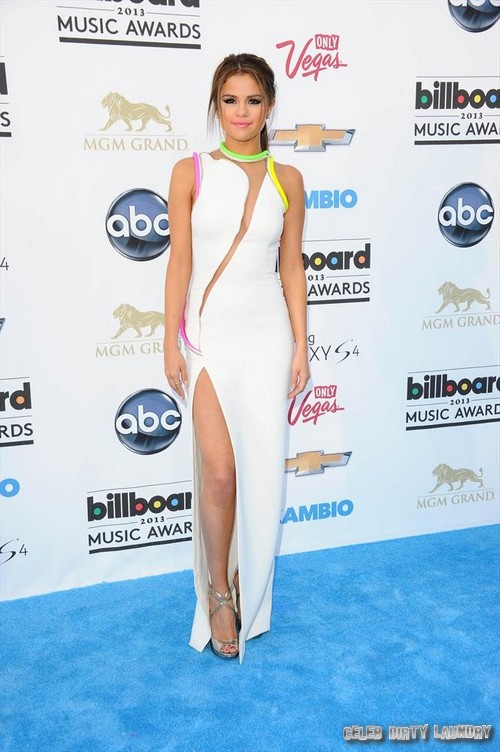 There are many reason why a woman borrows clothes from the stripper rack. It could be a boost of confidence or even a photo opportunity (J.Lo). But when someone shows up in a desperate neon dress at the Billboard Awards, we start looking for instability. In this case we know what it is. Did Selena Gomez wear a neon dress to light up her ex’s, Justin Bieber, path to her? After all it is dark inside of these theaters.

Poor Selena. Once a happy a child star now a poor Madonna wannabe. Where did the time go? She didn’t use to dress or act like this. Does she think the only way to keep Justin from cheating is to dress like Courtney Stodden. I mean one false move and the plunging curve neckline will show her entire right boob. You shouldn’t wear a dress like this when you’re already made. This stunt is for washed up talents or people just trying to break into the business. She’s Selena F-R-I-C-K-E-N Gomez!

Sexy can be done tastefully not this crap. And I’m sorry Versace but what the hell? The description of the dress, Thanks to Hollywood Life, is this “Her white hot, Versace Couture gown featured a thigh-high slit while a sheer panel created the illusion of a sexy cutout and it allowed the star to reveal a hint of cleavage.” Selena is being applauded for wearing this dress with many actually saying they  like it. Do they actually like it though or does everyone just want to see Justin’s reaction. He is rumored to be sitting a couple seats down from her at the awards tonight.

I’ll be interested to know whether Justin takes her home for another impromptu photo session however I don’t like the message Selena has been giving lately. Yes she’s young and blah blah blah but she still is a role model. Pre-break up, she was an alright role model. Post, she’s been a bit of an attention whore. No, she’s not being called a whore but an “attention whore”. Completely different!!!

Look at her though. Does anyone want to tell their daughters to grow up to chase a man like this?