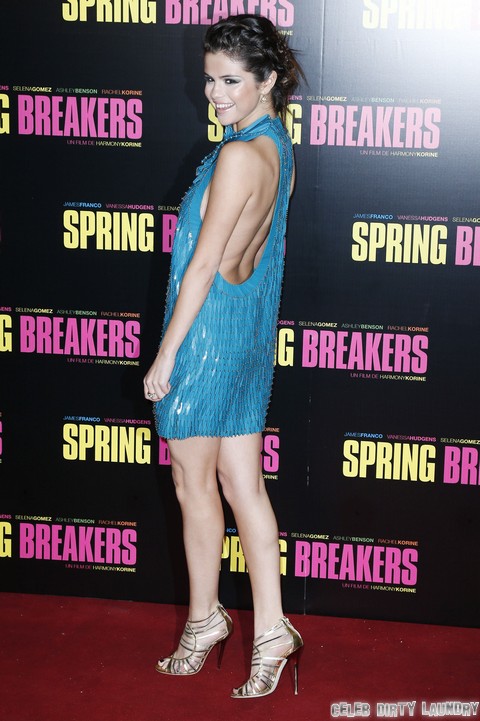 Selena Gomez’s boobies are so small, she shouldn’t be surprised that Justin Bieber was cheating on her with another girl. Ahh – we will never be able to get this image out of our head now. The Disney starlet, who has been trying ever so hard to shed her “good girl” image can now be seen with her A Cup-sized breasts out in display in a leaked photo which hit the internet earlier today. From the looks of it, it seems to have been on the set of her new movie Spring Breakers – whether or not these scene was actually used or not, is still unclear, or maybe it’s just Selena at a sleepover party with her girls. Umm, well then why is there a creepy guy next to her?

Okay – we’ve kinda established that this must have been from her latest movie, in which Selena plays a college girl who gets bailed out by a drug dealer after having robbed a restaurant to pay for her Spring break vacation. The drug dealer just so happens to end up using her to do some dirty work for him, which is kinda fair play, seeing that he was so kind enough to bail her out in the first place, right? LOLz. But this movie is looking more and more like a teenage porno than an actual movie suitable for viewing at a cinema. We’re not complaining though!

This leads to our next question: who is that girl with the nice booty? Could that possibly be Pretty Little Liars’ Ashley Benson‘s behind, or are we just dreaming for it to be true? If we didn’t know any better, we’d be wondering what sticky stuff Ms. Benson just so happens to be licking off from Selena’s small boobies – could that possibly be- oh, how do we say this? Could that possibly be- ugh, we’ll let your intelligent minds figure it out, because we just happen to love Selena too much to put her on blast like this.

But in all honesty, it is questionable whether Selena’s wild behavior could have also impacted her split from Justin Bieber. Yes, we were hearing all sorts of things of what Bieber was doing, but now that reports are coming forward saying she slept with rapper Gucci Mane (who definitely hasn’t got a small willy like Justin), she was seeing two other boys during her “faithful” relationship to Justin AND now this… you start to get a good idea of how Selena gets down. It seems like the good girl we all fell in love with has really left us for good.

But Selena, if you know you don’t have boobs, why strip down like this? I doubt anyone is even turned on by these pictures of your A Cup titties. My penis didn’t even move when I saw this pic. Like… that’s very worrying to me. I was expecting a little bigger.