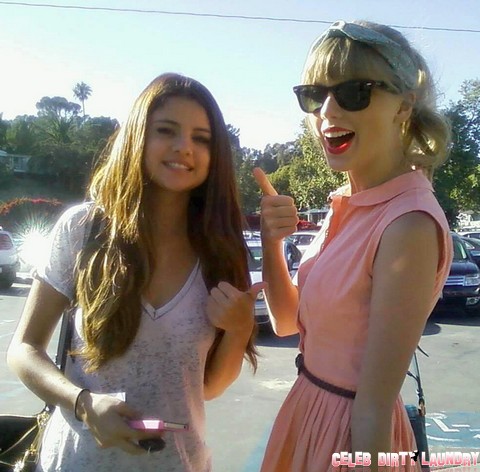 Uh, I would pay to see that combo! We’ve been following Justin Bieber and Selena Gomez’s relationship decay closely. The couple started to have problems after Justin got too cozy with lingerie model Barbara Palvin, and Selena hasn’t been able to trust him since. Fortunately, she came to her senses on New Year’s, dumping Justin over Twitter. We were hoping the split would be a fresh start, giving her time to get her health back on track after massive weight loss, but recent tweets suggest she isn’t doing so well.

Now is the time for Selena to turn to bestie Taylor Swift, who knows all about ugly break ups and moving on. Instead of moping around, Selena needs to get back to work and surround herself with family and friends, and she’s hoping to do just that. Selena gushed about a rumored concert tour with her country alter ego, Taylor, saying, “That would be a dream come true. It’d be the best girl tour ever.” They could call it the Lonely Hearts Tour, and every concert could end with a boy-obsessed Q & A with the audience. I don’t know how this hasn’t been thought of already. Obviously I’m some sort of concert conceptual designer prodigy.

While we’d love for Taylor and Selena to go on tour together, it won’t be for a few years—if at all. Taylor is preparing for the start of her Red tour, which will go through next fall, at least! Since her next album is due out Fall 2014 (this isn’t an inside scoop, it’s just logical—Taylor is predictable, down to a ‘t’!), and she already has an opening act for Red (Ed Sheeran), I’m thinking Selena will join her in 2015! Would you go to a Selena Taylor Concert combination? Will Selena and Taylor be relevant news in 2015, or long gone?