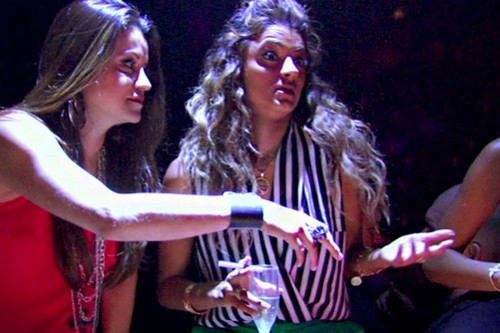 Tonight on Bravo SHAHS OF SUNSET continues with a new episode called, “These People Are Not Your Friends.”  On tonight’s show Mike helps his family pull together an epic Persian party to celebrate his brothers’ graduation.  Did you watch last week’s season 3 premiere?  We did and we recapped it right here, for you.

On last week’s episode Asa paid a visit to the bottling plant for Diamond Water and found that she will need to make even more changes. Moving forward in their relationship, Reza and Adam decided to move in together. GG pressured her boyfriend Sean into a bigger commitment and worked to get MJ hired as her sister’s realtor. The group was still split over MJ’s omission from Lilly’s party and tempers flare when MJ and Lilly finally meet face-to-face forcing the group to decide which side they were on in the MJ-Lilly Battle Royale.

On tonight’s show MJ is back in the group’s good graces, but after spilling one of GG’s secrets to her boyfriend Sean, she finds herself in yet another rift. GG asks for an apology from MJ, but MJ refuses leaving GG to retaliate by trying to get Leila to fire her. Lilly is still reeling from MJ’s assertion that no one in the group is her friend and questions why she even bothers. Mike helps his family pull together an epic Persian party to celebrate his brothers’ graduation from dental school, but tempers boil over at the party when Leila has to pull an angry GG and MJ apart.

Tonight’s episode of Shahs of Sunset picks up where we left off last weekend, Lilly leaving dinner after MJ curses her out. The group decides to head to Playhouse Nightclub after her dinner drama, they have a table booked in the VIP section. After a few drinks, GG gets upset because Sean is paying too much attention to the cage dancers. MJ is sick of GG and Sean fighting every time they go out, so she takes it upon herself to tell Sean that GG was making out with a guy at Lilly’s birthday party/prom. GG is irate that MJ betrayed her.

The next day Lilly goes out to lunch with her hairstylist Etienne, apparently he is her only friend, since MJ kicked her out of the group. Lilly is trying to gain weight, so she orders a lot of food, she wants to have curves. She says she is tired of looking like a “9 year old boy.” She fills Etienne in on the events the night before, she is disappointed that Reza and Asa didn’t stand up for her.

Reza pays MJ a visit at her condo, they are discussing what happened with Lilly and then with GG. GG calls MJ and says she is on her way home. Reza is scared of GG, but MJ won’t let him leave. He thinks that she is crazy enough to “stick someone.” GG arrives and MJ tells her she has to “check her knives at the door.”

GG asks MJ why she felt the need to rat her out to Sean, according to MJ she did it because it was funny and she thinks it was messed up that Sean isn’t allowed to look at girls but she is allowed to make out with other guys. GG storms out, and nothing is resolved. She thinks that MJ has double-crossed her because she was there for her when no one else was. And, now that Reza is back in her life, she seems to have forgotten that.

Mike is helping his parents plan his brother Jonathan’s graduation party from dentistry school. They are at the venue where the party is hosted, picking out the food that will be served and the seating arrangements. Mike is feeling a little pressured since his younger brother is now a Doctor.

Asa is checking on her Diamond Water at the bottling facility. She has worn n extravagant Parisian robe to the factory, and she wants to “clear the bad energy” from the factory. She stands in her robe, burning a bundle of sage, chanting about love and energy, wearing a hair-net, while all the factory workers watch her in awe.

GG pays her sister Leila a visit, and her sister reveals that her new house fell through. MJ is helping Leila lease her house and find a new house to rent. GG is upset that MJ still hasn’t found her sister a house, she calls her and tells her she has three days to find Leila a new house or she is taking her business to a different real-estate agent.

Mike, Jordan, and their family are getting dressed up Jordan’s birthday. Mike’s girlfriend Jessica is nervous that Mike’s family and friends at the party aren’t going to like her.

Reza, Adam, Asa, and GG are all getting ready for Jordan’s graduation party too.

The party is extravagant, as Reza puts it, it’s like a “Persian ecstasy pill.”

GG is conflicted, she had planned on inviting MJ and Reza on her family rafting trip. Now, she doesn’t know if she should just invite Reza. To make matters worse, MJ arrives at the party and completely snubs her.

Dinner is served, MJ, Asa, Leila, Reza, and GG are all seated together at one table. It is super awkward, and MJ and GG can’t stop bickering, and they end up throwing flower petals at each other.

After dinner they all head outside to smoke. MJ approaches GG and Leila, she has brought Leila her contracts. When they are done signing paperwork GG takes MJ aside to discuss their differences. GG is furious. MJ tells her she is “hyper-paranoid.” She thinks it’s not that big of a deal. GG gets loud, and is obviously having a “moment.” She raises her voice, swears, and rips off her own necklace, people at the party are starting to stare and she is causing a scene. Her sister Leila has to intervene, she tells GG to “get up before she pours her drink down her shirt,” and forces her to leave the party. MJ is done with her.