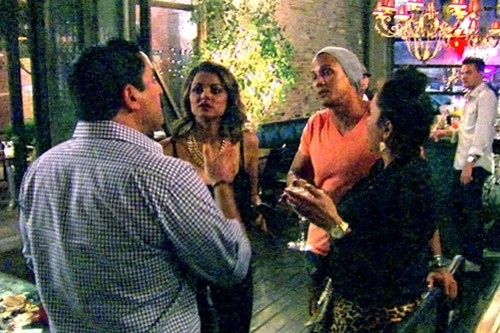 Tonight on Bravo SHAHS OF SUNSET continues with a new episode called, “The Velvet Rage.”  On tonight’s show Reza enters therapy to deal with his recent outbursts and comes to some surprising conclusions.  Did you watch last week’s season 3 premiere?  We did and we recapped it right here, for you.

On last week’s episode MJ and Vida worked on their relationship, and Vida discovered MJ could still surprise her. Asa revealed her plans with Diamond water to her parents. Reza’s boyfriend brought home a surprise Persian neighbor who triggered a violent emotional reaction in Reza. In an effort to get closer to Reza, Mike got the gang to visit a Middle Eastern gay club, where Reza had another run in with the unwelcome neighbor. A heated exchange between them pushed Reza’s buttons and he shocked the entire bar — and himself — with his emotional meltdown. The group was split when Reza stormed out with MJ, leaving Mike to pick up the pieces.

On tonight’s show Mike and Jessica grow closer, whil GG and Leila argue about MJ hanging around. Meanwhile, Reza enters therapy to deal with his recent outbursts and comes to some surprising conclusions.

Tonight’s episode of Shahs of Sunset opens with MJ shopping, she has a tough time finding that bras that fit her and don’t give her “back pudge.” Normally GG goes shopping with her and helps her pick out her clothes, but she still hasn’t squashed their beef, MJ is stuck shopping solo.

Mike’s girlfriend Jessica is attending her Judaism classes, she is converting for Mike. She spends three hours in classes every Sunday. Mike is concerned that Jessica is becoming more Jewish than he is. Mike realizes that time is ticking away, and before he knows it Jessica will be converted, and he will have to propose to her.

GG and her sister Leila are getting their nails done. GG’s sister reveals that she has been in contact with MJ and they have been spending time together. GG is upset that MJ is hanging out with her family. GG thinks MJ was dropped on her head one too many times as a baby and she needs to medicated.

Adam and Reza are discussing Sasha over omelets. Adam reveals that he has spoken to Sasha, and Sasha is really hurt about what Reza said to him. Reza agrees that he needs to apologize to Sasha, but he doesn’t think they need to become “homies.”

Lily is planning her dog Coconut’s birthday party. She is turning four, and Lily is going to invite all of Coconut’s friends. She heads to the pet store and buys party favors for the other dogs, new outfits for Coconut, and a birthday cake made out of peanut butter.

GG heads out to lunch with Sasha, they “clicked” at the Pride Parade and decided to hand out. Sasha reveals to GG that MJ took Reza’s side and also yelled at Sasha. GG tells Sasha about MJ trying to split up her and her boyfriend. GG thinks she has found “a new best-friend” in Sasha.

It’s time for Coconut’s birthday party, Lily and her make-up artist are setting up her party at the park. Lily has also invited a dog therapist, and a dog masseuse. Asa and GG arrive, GG has brought her pit-bull Hailey, and her boyfriend Sean. She also brought her new best-friend Sasha.

At the party GG reveals to Asa that she is still not getting along with MJ. Asa remains neutral, she thinks Reza said some disgusting things, but she knows that he has a whole lot going on inside his head.

Reza has headed to see his therapist Dr. Downs, he is an expert on gay rage. Reza explains to Dr. Downs what happened at the club with Sasha. He explains that Sasha reminds him of all the problems he has growing up as a gay Persian. Dr. Downs encourages Reza to talk to Sasha, and Reza agrees he should apologize to him.

Reza goes out for drinks with MJ and Asa. Ironically GG is having a girls’ night and getting drinks with half a dozen of her friends at the same time…and the same place. GG is less than thrilled to see MJ at the bar.

Lochnessa (the name that Reza has given to drunk Golnesa) approached MJ and asks her to talk to her. Reza and Asa “step outside” so that MJ and GG can talk. GG tells her to “stop being so crazy” and “stay away from her.” GG is at the point where she wants to “rip MJ to shreds.” Sean appears and confronts MJ as well. Reza decides that he should head inside and check on MJ, even though Asa wants him to stay out of it. MJ decides to apologize to Sean for coming between him and GG. MJ tells her that their “friendship is over.” GG is clearly wasted, and acting crazy. MJ, Asa, and Reza leave the bar, they are done with GG’s drama.