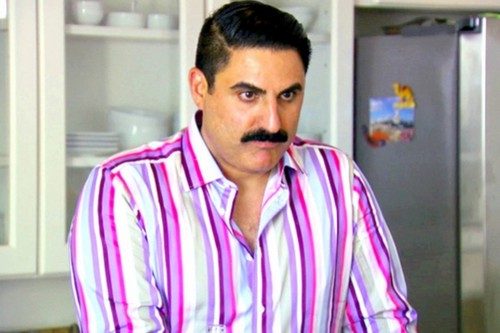 Tonight on Bravo SHAHS OF SUNSET continues with a new episode called, “Fresh Off the Boat.”  On tonight’s show Reza’s boyfriend brings home a surprise Persian neighbor who triggers a violent emotional reaction in Reza.  Did you watch last week’s season 3 premiere?  We did and we recapped it right here, for you.

On last week’s episode Mike tried to drum up new business for his partnership with Reza using an outlandish method, but found his mom’s approval was hard to come by. Asa worked to move forward with a new art show and found herself on the defense when Lilly confronted her about not standing up for her at the group dinner. GG and her family went on their annual rafting trip and invited Reza… who decided to trick MJ into going with him in an attempt to get MJ and GG to mend fences. After an epic rafting excursion, GG asked again for an apology, but MJ still refused to accept she did anything wrong.

On tonight’s show MJ and Vida work on their relationship, and Vida discovers MJ can still surprise her. Asa reveals her plans with Diamond water to her parents. Reza’s boyfriend brings home a surprise Persian neighbor who triggers a violent emotional reaction in Reza. In an effort to get closer to Reza, Mike gets the gang to visit a Middle Eastern gay club, where Reza has another run in with the unwelcome neighbor. A heated exchange between them pushes Reza’s buttons and he shocks the entire bar — and himself — with his emotional meltdown. The group is split when Reza storms out with MJ, leaving Mike to pick up the pieces.

Tonight’s episode of Shahs of Sunset opens with Mike and Reza at an appointment, Mike is seeing a hair transplant specialist about hair restoration. He is afraid that he is going bald, it runs in his family. After the Dr. confirms that he is not going bald, Reza has the Dr.’s twin brother come in (who is an ear specialist), and check out Mike’s ears. He thinks Mike is going deaf because half the time he doesn’t hear what Reza is saying, according to the ear Dr. his ears are fine too.

MJ is on a golfing trip with her Mom Vida. They have never played before, they have a private instructor. Vida actually compliments MJ, their relationship is improving slowly but surely. Despite her six inch heels, MJ has a pretty nice golf swing.

Asa is showing her parents around the bottling plant, where Diamond Water is being manufactured. Asa is excited because her parents are impressed with her project, and are proud of her.

Reza returns home from work, and finds that Adam has invited the neighbor over for drinks. Sasha is gay and Persian, so Adam thought Reza would like him. They don’t hit it off well though, within five minutes they get in a heated debate about religion, the country they are from, and how gay a Persian man should act. To add injury to insult he puts his feet on Reza’s chair, Reza kicks him out of their apartment.

MJ is helping Leila paint her house and get it ready to go on the market. MJ thinks that Leila is everything GG isn’t; level-headed, responsible, and kind. (Ouch!)

Lilly is busy shopping for fabric in a huge warehouse for her swimwear line. She negotiates with the owner of the store, and gets him to lower the prices, which were already super cheap.

MJ, Reza, Adam, Jessica, and Mike, and Mike’s brother, head out to check out a new club. Mike has heard that a lot of Gay Persian men hang out there, so he wanted to take Reza there. Reza is not impressed, he doesn’t like the drinks or the music. Reza and MJ waste no time to pressure Mike into buying Jessica a wedding ring. Just when Reza starts to settle in and enjoy himself at the club, he sees his neighbor Sasha.

Asa and her art assistant are working on her art exhibit, she is going to display photos of her throughout her life and use a projector to project them onto her body. She has four weeks to complete the project for the gallery.

Back at the club, Reza is fuming. Sasha comes over and says hello to Adam. MJ questions him about how disrespectful he was to Reza. Mike tries to talk some sense into Adam and get him to apologize. Sasha’s brother is with him, and Reza calls him out as being gay. Sasha flips, and Mike flips on Reza, all hell breaks loose. After Sasha leaves, Mike tries to make amends with Sasha. He apologizes for Reza’s actions. He feels horrible, Sasha and his brother are both crying. Mike is disgusted with Reza’s behavior at the club, and the names he called his fellow Persians.