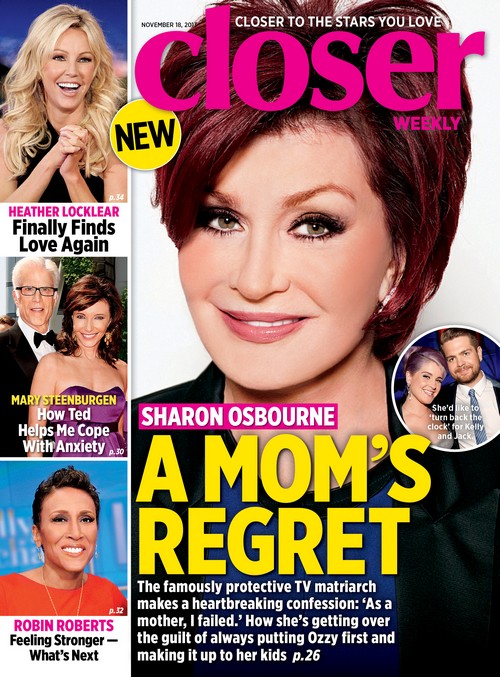 Closer Magazine has now had a few weeks to settle into its American debut, and it’s slowly starting to get the hang of it. After a lackluster first cover, this week’s cover features Sharon Osbourne discussing her regrets over putting her husband over her children, and how she hopes to make it up to them.

The title ‘A Mom’s Regret’ pretty much sums it all up in once concise statement. According to the report, Sharon feels that she has ‘failed’ as a mother, and her revelations detail how she’s finally getting over her regret over always putting Ozzy [Osbourne] first instead of her children, Kelly [Osbourne] and Jack [Osbourne].

Both Kelly and Jack have struggled with drug abuse in the past, and it’s obviously a result of the household that they grew up in. With a father that was famously battling addictions throughout his life and a mother that was largely absent during their childhood, Kelly and Jack got off track very quickly, and they never had a mature adult presence in their life that would help them get back on track. Eventually, both of them managed, but at this point, it was too little and too late for Sharon to do anything.

The cover also has a feature on Heather Locklear ‘finally’ finding love again, Mary Steenburgen‘s comments about how her partner helps her cope with anxiety, and Robin Roberts‘ battle with MDS and how she’s finally feeling strong again.

What do you guys think about this week’s cover issue of Closer? Let us know your thoughts in the comments.