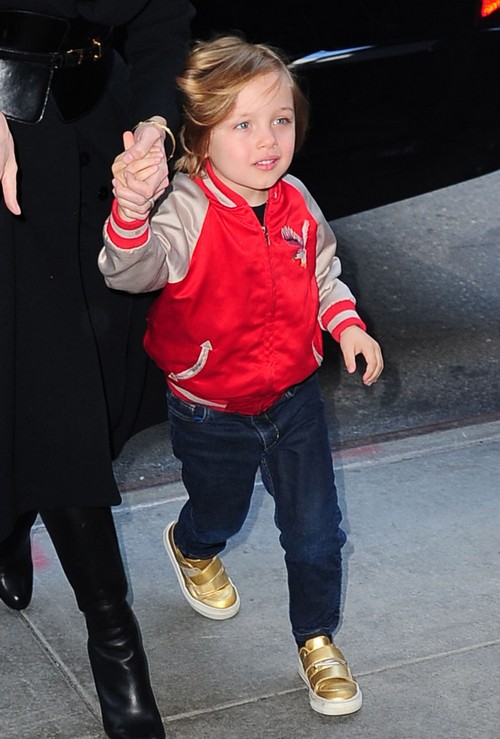 OK! Magazine seems eerily focused on celebrity children this week, and their latest report targets [arguably] the most famous Jolie-Pitt child, Shiloh Jolie-Pitt. Angelina Jolie‘s and Brad Pitt’s oldest girl is often the center of tabloid attention, even though Brad and Angelina clearly don’t care considering most of these reports are pretty much hogwash.

OK!’s latest report claims that Shiloh is becoming spoiled, with a source adding, “Shiloh has grown so accustomed to private planes that she refuses to fly commercial. Recently, Angelina was going to have a nanny take Shiloh to see Brad in England, and Shiloh threw a huge temper tantrum when she was told that she had to fly with people she didn’t know.”

Even if Shiloh threw this kind of tantrum, you think Brad and Angelina would stand for it? Whatever else people claim them to be, they have always proven to be good parents, and allowing that kind of tantrum would never come under good parenting. Besides, Shiloh hardly seems like a diva child – if anything, she seems like one of the most chilled out in that entire lot of kids.

But wait, the report isn’t quite over. The source also adds that Shiloh has had her every whim and wish granted, explaining, “She loves swords. So Brad started building her a $2 million collection of rare and vintage ones. She isn’t allowed to play with the swords — Brad has them locked up — but Shiloh spends hours looking at them.”

Eh, this I actually believe. Brad loves giving his family expensive gifts, and I can totally see him going all out and buying an expensive sword collection. But I don’t think that makes her spoiled – it just makes her the daughter of a very loving and doting father who has the resources to buy her gifts that most parents wouldn’t be able to afford.