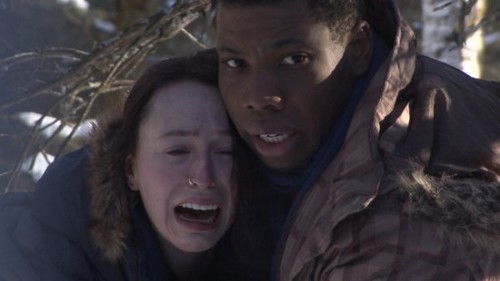 Tonight on NBC SIBERIA continues with a new episode called, “A Gathering Fog.” On tonight’s show freezing temperatures and near zero visibility, a result of the thick fog, put their lives in peril. Elsewhere, the other contestants left at the camp make a grisly and horrifying discovery. Did you watch last week’s episode? We did and we recapped it for you, right here.

On tonight’s show plunging temperatures and withering hope, pushed some of the contestants to the edge of sanity, requiring one to be tied down while another’s life hung in the balance. The group hiking out toward the beacon faced death amid the treacherous cold, while the others search the abandoned and bloody producers’ camp, yielding some desperately needed food and clothing. But the joy was short lived as the reality of an early winter sets in with the contestants now split into two groups each not knowing the fate of the other.

On tonight’s show with the sudden and mysterious disappearance of some contestants, and those remaining split into two groups to find help or rescue, natural and supernatural elements combine to heighten their fear, anger and desperation. Joyce (Joyce Giraud), Johnny (John Wactor), Sam (Sam Dobbins) and Daniel (Daniel David Sutton) continue a not-so-steady course toward a beacon that seems to have vanished. Meanwhile, freezing temperatures and near zero visibility, a result of the thick fog, put their lives in peril. Elsewhere, the other contestants left at the camp make a grisly and horrifying discovery. Also starring Jonathon Buckley, (host), Irene Yee, Anne-Marie Mueschke, Sabina Akhmedova, Esther Anderson, Neeko O.J. Skervin, Miljan Milosevic.

Tonight’s episode 7 of Siberia is going to be an exciting one that you won’t want to miss, so be sure to tune in for our live coverage of NBC’s Siberia at 10 PM EST! While you wait for our recap hit the comments and let us know what you think of Siberia season 1.

And so begins the mysterious disappearance of Irene. Where is she and did Miljan take her? Those two have officially been red faced and considered MISSING on the homepage so who knows what happened. But maybe the hand sticking up out of the snow belongs to one of them.

No the perfectly staged body lying in the snow is Natalie. Everyone thought she quit back when they were all hot but she must have been alive enough to dress herself warmly and die in the snow. Anne Marie is of course extremely heartbroken.

Esther jumps the gun and accuses Milijan of killing Natalie before he comes for the rest of them. She say he could be the reason another contestant had died but Sabina tells her she’s wrong. Whatever left the marks on “Natalie” weren’t human. Anyway they still have to look for Irene. However Anne Marie refuses to go she wants to bury her friend. Esther, probably feeling sorry for earlier, agreed to help her bury Natalie. Neeko and Sabina have to come back though. No stalling.

Later when Sabina and Neeko are looking for the others she further explains the marks on Natalie. She says she saw those same marks on the tiger they found. She doesn’t know the animal but it’s proving to be vicious.

Then there’s Sam, Joyce, Daniel, and Johnny. They almost lost sight of the bell tower. Jonny thought he lead them the wrong way. Fortunately they did find the bell tower again but they were forced to do it without Sam. Sam was too weak to continue with them and so they left him behind.

Is too scripted that Johnny is climbing the tower when suddenly out of the corner of her eye Joyce notice a DANGER sign. She just realized what it when Johnny is electrocuted off of the tower. Weird how he wasn’t electrocuted the moment he touched the tower. He was shocked by the middle base of the tower. Some would have thought the top layer would be dangerous and not the bottom.

It doesn’t matter. Johnny is down on the bank of snow without a pulse. Daniel tried to resuscitate him and that failed. Suddenly out of nowhere Sam all perfectly healed and no longer on the brink of death gives Jonny the much needed CPR. Johnny survives and is instantly on his feet telling them he saw a building. The writer that writes their recovery time really needs to low his pace.

Anne Marie and Esther did give burying Natalie their all. They got a shovel and everything to bury the mannequin. They only just given up when something someone surprised them from behind.

Sabina and Neeko are still looking for the other two when Sabina decides now is the time for an Emmy push. Her story although heartbreaking will not sell well. Her tears weren’t convincible to anyone other than Neeko. He now knows why she needs the money and will most likely try to help her win in the end. As seen with Esther people can pull off some of the dirtiest tricks in the book in order to win.

Johnny is able to lead his friends to the building he saw. They get there and find no one. It’s an emergency center and yet no one is there. Completely deserted. Johnny has to break a window to enter. The place is stocked with soda of all things. Daniel was enjoying a beverage when the group hears something making noise in the back room. Could be the same creature that took Esther and Anne Marie?

According to the foot prints left behind and found by Neeko and Sabina, the prints appear to belong to Big Bird. Is it him? Has he left Sesame street?