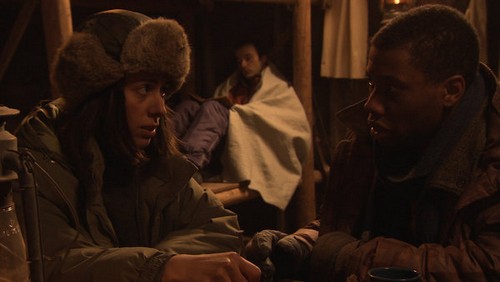 Tonight on NBC SIBERIA continues with a new episode called, “One by One.” On tonight’s show the effects of starvation and the abject fear of their likely demise drive the behavior of the remaining contestants. Did you watch last week’s episode? We did and we recapped it for you, right here.

On tonight’s show with the sudden and mysterious disappearance of some contestants, and those remaining split into two groups to find help or rescue, natural and supernatural elements combined to heighten their fear, anger and desperation. Joyce, Johnny, Sam and Daniel continued a not-so-steady course toward a beacon that seems to have vanished. Meanwhile, freezing temperatures and near zero visibility, a result of the thick fog, put their lives in peril. Elsewhere, the other contestants left at the camp make a grisly and horrifying discovery.

On tonight’s show (Joyce Giraud), Daniel (Daniel David Sutton), Sam (Sam Dobbins)and Johnny (Johnny Wactor) look for power at the research station and make a horrifying and grisly discovery. Meanwhile back at the cabins, one of the missing contestants returns with a story that shocks Sabina (Sabina Akhmedova) and Neeko (Neeko O.J. Skervin) and forces them to take defensive action, including a renewed search for the missing rifle. The distance and separation between the groups becomes more stark as the settlers face starvation and attack by unseen forces, while the group at the research station enjoys relative comfort and learns more about the mysterious history of the Siberian wilderness.

Tonight’s episode 9 of Siberia is going to be an exciting one that you won’t want to miss, so be sure to tune in for our live coverage of NBC’s Siberia at 10 PM EST! While you wait for our recap hit the comments and let us know what you think of Siberia season 1.

The noise the guys heard was merely the wind. Daniel and Johnny go looking for supplies. The camera, that never seems to run out of battery, provides the light throughout their journey.

Back at the camp site, Sabina and Neeko run from the sounds of menacing Big Bird/ predator waiting for them. They saw his tracks around the place Esther and Ann Marie were last seen. Those two are probably “dead”. Neeko and Sabina re worried about them not having a gun. All they got is a crossbow. Howevr it’s not a hideous creature that comes through the door. It’s only the weirdly and possibly psychotic Miljan.

Milijan tells them he was ordered to take Irene but at the location he saw something coming for them and left Irene to fend for herself. What a gentlemen. Neeko doesn’t believe him but now is not the time to beat the truth out of the guy. There still is big bird waiting outside.

The remaing group at the station are still looking for supplies. Joyce who had wanted to stay with Sam earlier decide to ditch the old man and stick next to the younger that can actually protect her in an emergency. Well, being at the station has just turned into an emergency. The three had found a radio system but the thing needed more power than they had. As they started searching for anything they could use, they found bullet casings. Within seconds the find the man most likely to have used the gun lying dead on the floor.

Joyce is freaking out. There are primarily in the dark. Daniel was fortunate enough tohave found the breaker but it went out in less than a minute. The system must be broken. Still those few seconds allowed Jonny to see the other dead bodies. He doesn’t tell the rest of them what he saw until they evacuated the area.

They get Sam and continue to look around. They find a clinic area. The people that worked there used to do experiments. They manage to find a live falcon there as well. The whole place is spooky and not close to what they wanted to find so Sam and Daniel head outside to fix the generator.

Sam had some experience with it before and he’s able to fix the generator. They all meet back at the radio only to find it’s still not working. Daniel can see why though by looking the window. The beacon that was previously miles away is now lying smashed up at the station house. Those props are so light.

Sabina had come up with a plan to fight whatever is outside. She said a fire would keep an animal away so they set one. What they hadn’t counted on was the moment they went outside they heard flapping noises. Big Bird can fly!

Back in the cabin, Sabina gets a gun from what looks like a secret hiding place. She fired off some warning shots and for now at least they don’t see anything outside waiting for them. By morning just when they’ve all given up hope they hear it. Fighter Jets. They know they can be saved now but the jets won’t allow the driver to see them all the way on the ground. They need to create a signal.

Daniel and Johnny find a useful map. It shows a town about a hundred mile away which is both good and bad. They can’t walk there but the tow truck they found could be fixed into taking them. In any case they now have something productive to focus on. All of those confessionals to the camera was really using all of their acting techniques. Joyce’s tears are so played out. Taking the body off the mannequin is not that hard.

Daniel the official tech nerd fixed the computer and instead of trying to fix the internet he shows his friends footage hidden on the computer. They do love the silent movies.

Sabina, Neeko, and Milijan were fighting over food that Neeko was hiding then right before Milijan stormed off. Once outside Milijan called for the guys to join him. When they did they were instantly surrounded by gun trotting natives. These guys look scary and their guns are aimed at the contestants. What do they want?